European states to take in 400 children after Moria camp fire 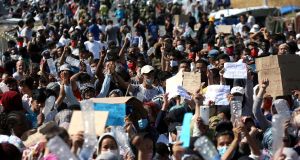 Four hundred children left without shelter after a fire at a migrant camp on the Greek island of Lesbos will be relocated across 10 countries in the EU, with Germany and France taking in the bulk.

Germany’s interior minister, Horst Seehofer, said on Friday morning his country is prepared to take up to 150 child unaccompanied minors from the burnt Moria camp – despite some of Germany’s largest states and cities saying they were prepared to take in more.

The European Commission later confirmed it would finance the transfer of 400 unaccompanied children to 10 participating member states, as well as temporary shelter for up to 1,600 people on a ferry in Lesbos.

In Germany, Seehofer drew criticism for declining to unilaterally take in more of the nearly 13,000 people in need of emergency housing after a fire gutted the Greek camp on Tuesday and Wednesday.

“The most important thing is help on the ground”, for example by providing temporary shelter and food supplies, he told a joint press conference with EU commission vice-president Margaritis Schinas.

The federal states of Berlin, Thuringia, North-Rhine Westphalia and Bavaria, as well as the mayors of 10 German cities, have announced they are willing to take in migrants from Lesbos.

“We are prepared to take in people from Moria to defuse the humanitarian catastrophe,” said an open letter sent to Seehofer and chancellor Angela Merkel by the mayors of cities including Duesseldorf, Freiburg, Hanover and Cologne.

In Berlin, about 3,000 people called for Germany to take in migrants from the Moria camp as they demonstrated under the motto “We have room” on Wednesday evening, condemning Moria as a “camp of shame”.

Seehofer, who has repeatedly clashed with Merkel over her open-border stance at the height of the 2015 migrant crisis, has so far blocked the arrival of migrants based in Greece through federal reception initiatives, insisting on the need for a co-ordinated European response instead.

Schinas, the European commissioner for promoting the European way of life, on Friday confirmed that the commission would unveil proposals on September 30th for a new pact on migration and asylum. “Moria is a sharp reminder to all of us for what we need to change in Europe, ” he said.

German media has accused Mr Seehofer of using his call for a joint European response as an excuse for inaction. In an op-ed on its website, the news weekly Der Spiegel said the inhumane living conditions at the Moria camp had been known to Europe’s national governments for months but were never acted upon.

“Taking these refugees in would indeed run counter to a strategy of maximal deterrence,” Der Spiegel argued. “But then politicians should face up to their own cold toughness – and not pretend that the inaction of the past is only an unpleasant consequence of difficult European negotiations.” – Guardian