Germany to take in 1,500 Moria camp migrants after fire 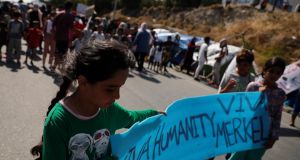 Women and children protest on a road where asylum seekers from the destroyed Moria camp find shelter near a new temporary camp, Mytilene, Greece. Photograph: EPA

Germany is to take in 1,553 migrants left homeless after last week’s fire at the refugee camp Moria on the Greek island of Lesbos.

But the plan, with its echoes of the German response to the 2015 refugee crisis, has divided public opinion and generated tension inside the ruling Christian Democratic Union (CDU).

“Germany will now take in more than 1,500 refugees, mainly families with children, who are currently in Greece,” said Olaf Scholz, German federal finance minister. “We are striving for a European aid effort, under the terms of which our country would take in more people in need of protection.”

Officials said Germany would accept about 408 families in total, comprising migrants whose asylum applications had already been granted. The latest decision brings to 2,750 the number of asylum seekers Germany has accepted from Lesbos and camps on other Greek islands.

The first families are expected to be processed within a month, tested for Covid-19 and brought to Germany. The country has already accepted 53 unaccompanied minors, a government spokesman said on Monday.

Berlin said the measure was a one-off gesture, pending an international agreement on sharing the responsibility – and a revised EU asylum rule book. The European Commission plans to present its new asylum proposals next Wednesday, a week earlier than planned.

Austrian chancellor Sebastian Kurz was quick to criticise the move and predicted that few would follow Berlin’s lead.

“We will not follow the German path,” he said, adding that Austria had “a very, very high number of refugees in the last years”.

It was more important, he said, to integrate these people than “to keep taking in new” people.

The decision follows days of emotional debate in Germany about its moral responsibility to help those in need on Lesbos.

Initially, Germany’s federal interior minister Horst Seehofer said it was more important to offer “help on the ground”, for example by providing food and temporary shelter.

Then four federal states, and the mayors of 10 German cities, wrote an open letter to Mr Seehofer, saying they were willing to take in refugees from Lesbos “to defuse the humanitarian catastrophe”.

Responding to the new offer from Germany, the opposition Green Party said it remained too modest and called for a larger intake in the region of 5,000 people.

But inside Dr Merkel’s centre-right CDU, unease is palpable at potential political blowback, months before the party chooses a new leader and a year before the federal election.

CDU leadership hopeful Friedrich Merz agreed with Mr Kurz that German hopes for a European solution were illusory, given the lack of interest elsewhere in the bloc to take in migrants.

Meanwhile, Greek authorities have announced the arrests of five young migrants in connection with the fires. They face charges of intentionally setting fires in the camp while another man has been identified and authorities are in the process of locating him.

A temporary camp on the island has already been built by the Greek army, and hundreds of migrants have been transferred there. Greek officials said that any migrant who wishes to leave the island for any reason will have to pass through this new camp.

The European Commission has said it would pay for the transfer of 400 unaccompanied children to 10 participating member states, as well as temporary shelter for up to 1,600 people on a ferry in Lesbos.