Minister resisting calls to resign over encounter with Venezuelan vice-president 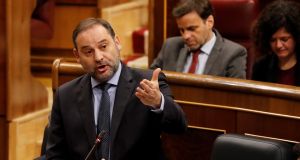 A Spanish government minister is fending off calls to resign over an encounter he had last month with Venezuelan vice-president Delcy Rodríguez in Madrid.

Transport minister José Luis Ábalos spoke with Ms Rodríguez in the early hours of the morning on January 20th on the aircraft she was travelling on, which was on a stopover at Barajas airport.

After press reports stated the two had spoken, Mr Ábalos denied having a “meeting” with Ms Rodríguez, who is on a list of Venezuelan officials barred from the European Union for allegedly violating human rights and undermining democracy. Instead, he said he had got on the aircraft in order to greet Félix Plasencia, Venezuela’s tourism minister, with whom he is friendly.

However, Mr Ábalos subsequently acknowledged that he had been asked by colleagues in the government to ensure that Ms Rodríguez did not get off the aircraft in order to prevent her from entering EU territory and potentially causing a diplomatic dispute.

Mr Ábalos’s version of events has failed to convince the opposition and the sensitivity of the Venezuela issue in Spanish politics has turned this into the first crisis of the new government of Pedro Sánchez.

On Wednesday in Congress, opposition politicians chanted for Mr Ábalos to resign as he faced a barrage of parliamentary questions about the encounter, details of which they claim the government has tried to cover up.

“I’m not worried about your credibility, Mr Ábalos, because it’s clear that you’re a liar,” said Valentina Martínez of the conservative Popular Party. “What worries me is Spain’s credibility, with its European partners, its Latin American partners and with the United States.”

Mr Sánchez defended his minister. “Ábalos did his duty, which was to avoid a diplomatic crisis,” he said.

Close links to Venezuela have made the South American country’s political and economic instability a prominent issue in Spain. Of the Venezuelans who have fled their country in recent years, tens of thousands have settled in Spain, often because of family connections.

Spain is regarded as a bridge between the EU and Latin America and its stance on Venezuela is seen as significant. US state department official Jon Piechowski has described the airport encounter as “disappointing”.

This is not the first such controversy involving the two countries. The Venezuelan government has frequently accused former Spanish prime minister José María Aznar, a conservative, of involvement in the botched 2002 coup that temporarily removed Hugo Chávez from power. Mr Aznar denies the claim.

Last year, Spain’s Socialist government took a common line with other EU members in acknowledging Juan Guaidó as “caretaker president” after the incumbent, Nicolás Maduro, had refused to hold elections.

Yet despite the tensions this stance has caused, the Spanish Socialists maintain some ties with Mr Maduro’s administration, as the Madrid airport incident appears to confirm.

Parties on the right have frequently accused the government of taking a soft line with Mr Maduro, whom they claim has ideological common ground with Mr Sánchez. Although the Spanish prime minister is a social democrat, he is in coalition with Podemos, a party that has had links with leftist administrations in Latin America. Juan Carlos Monedero, a former senior figure in Podemos, was an adviser to Chávez.

A visit by Mr Guaidó to Madrid last month highlighted Spain’s political division over Venezuela. While politicians on the right treated him as a hero, Mr Sánchez did not meet with him at all.

In addition, former Spanish Socialist prime minister José Luis Rodríguez Zapatero, who frequently visits Venezuela in an attempt to mediate in the political crisis there, has been accused of helping Mr Maduro.

On Wednesday, Mr Sánchez drew renewed criticism from the opposition, after he referred to Mr Guaidó as the “leader of the opposition”, rather than as “caretaker president”. However, the Spanish government insisted that its stance has not changed.