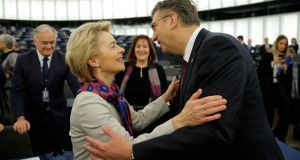 Every new presidency of the EU has its own flavour, its own national initiative to mark it out from the rest and to be remembered by.

Croatia, a group of visiting Brussels-based journalists were told in Zagreb last week, will do all the expected work inherited from the Finns, help the Brexit process on its way, broker an EU budget, and help complete banking union talks. There are also issues such as the digital economy, migration, and opening discussions on the future of Europe.

But there is one other agenda item rarely mentioned in the EU – the challenge of depopulation, of demographics.

Membership of the EU, which Croatia joined just seven years ago, was a mixed blessing. The glorious right of free movement, and the prospect of hourly pay rates in Germany, France and the UK that were three times higher, have combined with a drastic decline in the birth rate to denude the state’s countryside.

Almost 40,000 people emigrated in 2018 and 189,074 people have left Croatia – which has a population of just 4.2 million – since it joined the EU. The World Bank projects the population to decline to 3.46 million by 2050. The EU estimates that 15 per cent of working-age Croats live in other EU countries, the second-highest such percentage in the union after Romania.

The birth rate at 1.44 children per woman is 10 per cent below the EU average and close to one-third less than the natural replacement rate of 2.1 that countries need to hold their populations stable.

Croatia is not alone in the Balkans to face such a population decline. On current projections, by 2050 Bulgaria will have 38.6 per cent fewer people than it did in 1990; Serbia 23.8 per cent fewer; Croatia 22.4 per cent, and Romania 30.1 per cent.

Zagreb has tried to tackle the demographic problem, but so far with no success.

A Demographic Revival Council was founded in 2017 to co-ordinate ministerial policies. A new strategy for halting and reversing Croatia’s decline is being prepared to replace a national population policy from 2006 and the country is hoping for EU input on the issue. It has persuaded new European Commission president Ursula von der Leyen to give Croatian commissioner Dubravka Suica a demography dimension to her portfolio – a first .

Large sums are being invested by Zagreb in everything from kindergartens to agriculture, especially in areas that have been depopulating over the last quarter of a century, such as the east of the country.

The issue has also played into the migration debate – labour shortages, after all, could be met by the refugees who are flowing across the region to escape war. But assimilation of thousands of Islamic migrants from the Middle East, Pakistan and Afghanistan is deeply problematic for countries that are culturally homogenous. Croatia itself emerged as an expression of a strong Croat identity from the multinational Yugoslavia.

During the migration crisis of 2015-2016, 700,000 migrants crossed into Croatia. Now there are up to 700 attempted illegal crossings every day, according to Croatian sources.

Viktor Orban in neighbouring Hungary, the EU’s most vocal opponent of resettling refugees, has a similar demographic problem and has instead promoted higher birth rates as a cornerstone of government policy. He recently announced that women who bear four or more children will never have to pay income tax again, while newly married couples are eligible for a loan which will be written off if they have three children.

Serbia, too, has tried to provide cash benefits for each child, with an increasing scale for up to four children.

Plenkovic, Croatia’s prime minister, wants Brussels to examine which countries are most affected by demographic issues and what policies and measures have been implemented to boost birth rates, helping the EU to confront the problem.

“We really did a lot in terms of demographic politics; tax, childcare, amounts of money that we give to parents for motherhood, etc – we are doing as much as we can. But I think we should do something at the European level,” he told journalists.

Brussels can help, though it is unlikely to embrace motherhood as a solution. Using cohesion, regional, and farm funding, it can help make rural life pay and reduce the appeal of emigration to the richer EU states. For Croatia and the Balkans, the current budget talks and the preservation of current levels of cohesion funding is a matter of survival.