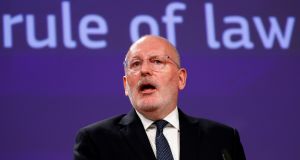 European Commission vice-president Frans Timmermans: EU must strengthen its “toolbox for tackling the erosion in member states of the rule of law”. Photograph: Francois Lenoir

Stepping up its campaign against the erosion of the rule of law in member states, the European Commission has initiated new infringement proceedings against Poland and warned Romania that where it is concerned it is ready to do so “within days”.

Commission vice-president Fran Timmermans on Wednesday launched an EU-wide debate on new mechanisms to monitor and strengthen the upholding of basic standards. The commission will bring forward proposals in June.

Warsaw is already subject to two other commission infringement procedures over the reform of its courts and is the subject of an article 7 disciplinary procedure in the Council of Ministers over the same issue.

The commission has given the Polish government two months before court proceedings are issued to reply to charges that its new disciplinary procedures for judges infringe on the principle of judicial independence and do not safeguard them from interference from the executive.

The new law, among other things, allows judges to be subject to disciplinary proceedings for the content of their judicial decisions, including decisions to refer questions to the European Court of Justice.

The commission also warned Bucharest that if it goes ahead with new legislation that confers immunity on politicians convicted of corruption , it will issue infringement proceedings within days. The ruling Social Democratic Party has been pushing a series of legislative changes that would curb the independence of prosecutors and decriminalise some corruption offences.

“I warn the Romanian government not to take any action that affects the judiciary and creates impunity for high-level officials who have been convicted of corruption,” Mr Timmermans said.

Speaking of the need to strengthen the EU’s “toolbox for tackling the erosion in member states of the rule of law”, the commissioner warned that a “problem in one member state is a problem for the whole union”. The functioning of the EU’s legal and trading systems depended on mutual trust between member states in their respective legal systems. Although the EU treaty’s article 7 procedure was an important tool to hold member states to account, “further action is needed”.

Article 7 allows member states to be cited for persistent breaches of the rule of law and if all the other member states agree, they could be disciplined to the point of losing their vote in the European Council.

Mr Timmermans denied suggestions that the procedure was a blunt and ineffective instrument but said new measures could complement it and asked member states to engage in a debate on how this can be done.