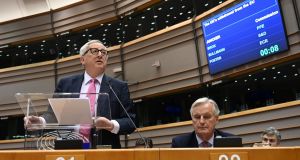 If the UK can approve the withdrawal agreement with a viable majority before next week’s summit, the EU will agree to a short extension up to May 22nd, the President of the European Commission, Jean Claude Juncker said on Wednesday.

He warned that a no-deal scenario on April 12th still looks “more and more likely”.

“If the House of Commons does not adopt a stance before that date [the summit] no short-term extension will be possible,” he warned.

Mr Juncker was speaking to the European Parliament in Brussels in response to British Prime Minister Theresa May’s promise last night to engage with the Opposition.

Warning of the dangers of a no-deal Brexit which he said would hurt the UK worse than the EU, the Commission President insisted that in those circumstances the UK would still be expected to honour the three important elements of the withdrawal agreement: the protection of citizens’ rights, its financial obligations to the union, and, in the interests of peace in Ireland,“both the spirit and the letter of the Good Friday Agreement”.

“No-deal does not mean no commitments. And these three issues will not go away. They will be a strict condition to rebuild trust and to start talking on the way forward,” he insisted.

It is an implied reference to the permanence of the backstop which will please Dublin which insists that it is the only feasible way in which the Belfast Agreement can be honoured.

Mr Juncker again reiterated that the EU remains willing to amend the political declaration on the future relationship, key to accommodating the sort of changes Mr Corbyn is likely to seek.

“The EU is prepared to add a certain degree of flexibility to the political declaration in order to open the door to a close partnership between the EU and UK in the future,”he said. “We are open to a whole panoply of options — it could be a free trade agreement. It could be a customs union. Or a European Economic Area, we’ve been open since the beginning, to see this in the political declaration.”

He added that “The EU is prepared to begin discussions, negotiations on our future partnership as soon as the withdrawal agreement is signed, even before the ink is dry the commission team is ready to go.”

Mr Juncker warned that the only beneficiaries of a no-deal scenario would be those opposed to global integration; populists and nationalists.

“The only ones who will be delighted will be those who wish to weaken the EU and of course the UK.”