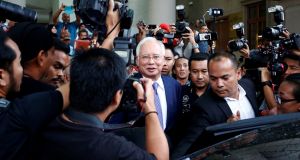 Najib Razak, the former prime minister who sat at the pinnacle of a political machine that dominated Malaysia for more than 60 years, on Wednesday began to face the first of multiple corruption trials stemming from the disappearance of billions of dollars in public funds.

The allegations of graft at 1Malaysia Development Berhad, or 1MDB, the state-owned investment fund he founded, led to widespread public anger and to Mr Najib’s electoral defeat last year. The upheaval reoriented Malaysian politics and left the former leader, who was once considered untouchable, facing the prospect of decades in prison.

“This is a sea change for Malaysian politics for the very simple reason that for the first time a former head of government has been charged with corruption,” said James Chin, director of Asia Institute Tasmania at the University of Tasmania.

Mr Najib (65), went on trial in Kuala Lumpur, the capital, as part of one of the biggest corruption cases in history to go to court. He faces dozens of charges over allegations of graft at 1MDB, which lost $4.5 billion (€4 billion) that prosecutors in Malaysia and the United States say was funnelled to his circle, including $731 million that went into his own bank accounts.

The scandal has tarnished the reputation and economy of Malaysia’s government, which has long prided itself as being a thriving leader within southeast Asia. Now, it is facing a $250 billion national debt that ballooned in part because of 1MDB’s heavy borrowing.

Mr Najib’s first trial, which began on the 10th anniversary of the day he was sworn in as prime minister, will cover a sliver of the accusations of wrongdoing. He will face seven charges of criminal breach of trust, abuse of power and money laundering involving $10 million that prosecutors say was transferred from SRC International, formerly a 1MDB subsidiary, into Najib’s accounts.

The trial had been delayed for months, and on Wednesday Mr Najib’s lawyers unsuccessfully sought another pause. Tommy Thomas, the attorney general of Malaysia, told the court that Mr Najib had once “wielded near-absolute power”, noting that it was the first time a former prime minister had faced trial in Malaysia.

“The accused is not above the law, and his prosecution and this trial should serve as precedents for all future holders of this august office,” Mr Thomas said.

Mr Najib, in dark blue suit and matching tie, sat in the dock for nearly three hours before proceedings were adjourned until April 15th.

Initially quiet after his electoral defeat, Mr Najib has been increasingly vocal on social media, professing his innocence and criticising the governing coalition. His wife, Rosmah Mansor, who is well known for her taste in luxury items such as designer handbags and multimillion-dollar pieces of jewellery, is facing 17 counts of money laundering and tax evasion. She has pleaded not guilty.

The US justice department has said that as much as $4.5 billion was misappropriated from 1MDB and siphoned to Mr Najib and his allies. Mr Najib himself received $731 million into his personal accounts, prosecutors say. The purported mastermind of the schemes, the Malaysian financier Jho Low, faces charges in Malaysia and the United States, but he remains at large and is believed to be in China. His representatives have said that he denies wrongdoing, and they call the case against him politically motivated.

Prosecutors have outlined a staggering list of things the money was spent on: a $250 million yacht named Equanimity; works of art by Monet and van Gogh; properties in California, London and New York; jewellery, including a 22-carat pink necklace worth $27.3 million; the production of Hollywood films and a see-through piano Low gave to Australian supermodel Miranda Kerr.

(Kerr has surrendered jewellery given by Low and has offered to give up the piano, but it was walled into her Malibu, California, home, complicating removal.) The Malaysian government announced on Wednesday that it sold the yacht, which was seized in Indonesia last year, for $126 million to Genting Malaysia, a casino and resort company.

Malaysia has also filed criminal charges against Goldman Sachs, accusing the Wall Street bank of making false and misleading statements and defrauding investors by raising more than $6 billion for 1MDB. The bank apologised for the role of a former partner who pleaded guilty to charges in the United States, and it has sought to distance itself from the scandal.

The 1MDB case, as well as concerns about debt to China that piled up at a staggering rate under Mr Najib’s rule, has been a rallying point for the administration of Mahathir Mohamad, the 93-year-old former mentor and ally of Mr Najib who returned to the prime minister’s post last year vowing to clean up the mess.

But some of the shine has already come off Mr Mahathir’s administration, which brought together an unlikely and potentially unruly collection of political blocs with little in common. Mr Mahathir has faced criticism over Malaysia’s rising cost of living, and he has been pressured to speed up plans to let Anwar Ibrahim, a former opposition leader who was released from prison last year, succeed him.

Mr Najib’s first trial was scheduled to begin in February, but was delayed by a series of legal moves by his defence. In recent months he has become a more vocal presence, campaigning in support of his party’s candidate in a March special election, crooning in a cover of a 1970s R&B song and embracing the nickname “bossku”, or boss, given by his supporters.

The candidate from United Malays National Organization, Mr Najib’s party, won the special election, taking a seat from the ruling coalition, which was seen as a sign of bubbling discontent with Mr Mahathir’s government. Mr Chin said he believed Mr Najib’s public relations efforts were based on the belief that if his party were to return to power, he could receive a royal pardon. “He truly believes he will get away with it,” Mr Chin said. – New York Times