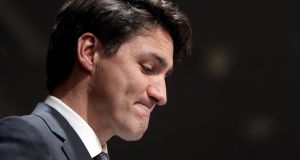 Canadian prime minister Justin Trudeau: “Civil wars within parties are incredibly damaging because they signal to Canadians that we care more about ourselves than we do about them.” Photograph: Chris Wattie/Reuters

Canadian prime minister Justin Trudeau on Tuesday sought to quell a crisis that threatens his chances of re-election, expelling from party ranks two former cabinet members he said had undermined the ruling Liberals.

Mr Trudeau said former justice minister Jody Wilson-Raybould and former treasury board chief Jane Philpott would no longer be allowed to sit as Liberal legislators. They were also barred from running for the party in the federal election this October.

The Liberals have been in turmoil since Ms Wilson-Raybould said in February that officials had inappropriately pressured her last year while she was justice minister to ensure that construction company SNC-Lavalin Group Inc escape a corruption trial.

“The trust that previously existed between these two individuals and our team has been broken,” Mr Trudeau told an emergency meeting of caucus.

“Civil wars within parties are incredibly damaging because they signal to Canadians that we care more about ourselves than we do about them,” said Mr Trudeau (47), who took office in November 2015 and faces a tough re-election battle this autumn.

Ms Wilson-Raybould, who tweeted news of her ousting before Mr Trudeau’s announcement, was demoted in January and resigned the next month. Ms Philpott quit shortly afterward, saying she had lost confidence in how Mr Trudeau was handling the matter.

“If people can’t express trust in the party and the prime minister, then they need to find another political vehicle in order to advance their ideas. It’s as simple as that,” justice minister David Lametti told reporters.

The expulsion represented a change of course for Mr Trudeau, who said as recently as last week that the Liberals needed strong legislators with differing points of view.

But increasingly angry parliamentarians had demanded both women be removed from caucus on the grounds they were undermining party unity.

Opinion polls show the crisis has cut public support for the Liberals to such an extent that they could lose in October to the official opposition Conservatives.

Mr Trudeau, who came to power promising “sunny ways” and a greater role for women in politics, admitted it “has been a difficult few weeks”.

The scandal also cost him the services of his closest aide, Gerald Butts, and Michael Wernick, the head of the federal bureaucracy.

Ms Wilson-Raybould said on Twitter: “I have no regrets. I spoke the truth as I will continue to do.”

Last Friday, to back her case, she released the audio of a confidential conversation with Mr Wernick, who did not know she was recording him. Mr Trudeau said that was “unconscionable”.

Mr Philpott said on Facebook that she “did not initiate the crisis now facing the party or the prime minister . . . it appears that the caucus is intent on staying the current course, regardless of its short-term and long-term consequences.”

Mr Trudeau has denied any wrongdoing. The scandal is starting to hit his fortunes in the populous province of Quebec, where the Liberals say they need to pick up seats in October to remain in power.

Conservative leader Andrew Scheer said Mr Trudeau’s decision sent a message that “if you tell the truth, there is no room for you in the Liberal Party”. – Reuters