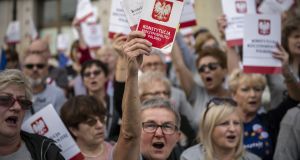 People hold the Polish constitution during a demonstration against the politicisation of the supreme court by the Polish government. Photograph: Attila Husejnow/Sopa Images/LightRocket

In the last week, the Luxembourg-based Court of Justice of the European Union has been preoccupied with its usual mix of commercial or economic cases: German state aids, a Spanish insurance liability case about a car going up in flames in a garage, an Italian case about the rights of part-time employees, and one about the Adidas trademark.

Ireland’s Gerard Hogan, an advocate general, gave the court an opinion on the labelling of goods from Palestinian territories occupied by Israel.

But in its ruling on Monday on an important Polish rule-of-law case about state interference with the judiciary, the court is staking out significant new ground in defence of fundamental values – reminding courts throughout the union that they are not only national courts, but EU courts, which must conform to and uphold fundamental EU principles and law.

The management of the national courts’ system has historically been a national competence, the prerogative of national administrations. But the Court of Justice has in recent times evolved the scope of its remit. Traditionally, it upheld the duties of member states to observe the basic human rights provisions of the EU Charter of Fundamental Rights only when they were implementing EU policies and programmes.

But in a recent case involving Portuguese judges, the court has made clear that it sees the logic of the EU treaty more broadly – the values of the charter must imbue all courts in the EU. They are EU courts as much as national courts.

The Polish case is a significant victory for the European Commission in its battle to rein in Poland’s perceived abuses – attempts by the governing ultra-conservative Law and Justice (PiS) party to curb the country’s independent judiciary. These have prompted widespread protests at home and strong international condemnation.

Poland, like Hungary, is facing political proceedings in the Council of Ministers on the same issue under article 7 of the EU treaty, an unwieldy process which, although embarrassing to those accused, appears unlikely to effectively discipline wayward states, not least because in this case each of the two countries can protect the other’s back.

Success in the Court of Justice infringement proceedings, whose decisions are binding on the Polish government, is another matter.

The commission has found a new, potentially powerful tool in its efforts to uphold political standards in the member states. It helps give it political leverage in the cause of the rule of law, and what some see also as important in the incremental rebranding of the union as a union of values and democratic principles, not just a marketplace serving business and economic interests.

Putting citizens and their rights at the centre of the union is key to restoring the union’s diminished legitimacy, politicians such as commission vice-president Frans Timmermans argue.

The Polish reforms complained of, the 2018 Ustawa o Sadzie Najwyzszym (Law on the Supreme Court), cut the retirement age for supreme court judges from 70 to 65, with the result that about a third of its judges, including its president, Malgorzata Gersdorf, were forced to step down early.

PiS claimed that getting rid of many of the older judges would modernise the court and root out corruption. Critics, however, argued that it was an attempt to get rid of left-leaning judges and replace them with a more conservative group that would be less critical of the government.

Judges would be allowed to stay on beyond 65, but their applications had to be approved by Poland’s president, which many judges saw as a fundamental threat to their independence.

Under pressure from the EU, President Andrzej Duda in December backed off, partially reinstating those forced into early retirement.

The commission pressed ahead with the infringement proceedings, nevertheless, determined to establish the principle that such removals constituted interference in the independence of the judiciary and were not justifiable in future as a means of “modernising” the courts.

“[These changes] are such as to raise serious doubts as to the real aims of that reform,” the Court of Justice argued in its ruling. “In addition, that measure appears neither to be appropriate for the purposes of achieving the aims put forward by Poland nor to be proportionate.”

“Poland has infringed EU law,” the court wrote, noting that the measure that came into force last year “undermines the principle of the irremovability of judges, that principle being essential to their independence”.