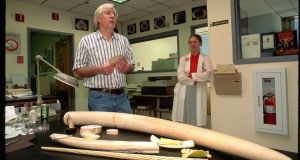 Confiscated tusks are held at a forensics laboratory of the US Fish and Wildlife Service in Ashland, Oregon. Photograph: Galen Rowell/Corbis via Getty Images

The barrier across the drive into the world’s sole wildlife forensics laboratory is made to fend off exploding lorries.

Packages containing remains of dead mammals, birds, reptiles and crime scene evidence are put through a scanner before being admitted to the inner sanctum of the state-of-the-art Crime Scene Investigation facility in Ashland belonging to the US Fish and Wildlife Service (FWS).

Lab director Ken Goddard, a white haired, white moustached septuagenarian, says the security precautions are necessary to ensure the facility is not the target of a bomb attack.

Security is indeed tight. Law enforcement agencies provide the lab with material that can convict traffickers, poachers and thieves who engage in the multibillion dollar commerce in ivory, pelts, skins, shells, bones, feathers and internal organs of creatures protected by the Convention on International Trade in Endangered Species (Cites).

Working at the lab can be dangerous, not just at the facility itself, but far from this quiet Oregon town famous for its Shakespeare festival. Goddard and a colleague had a close call in Moscow when the two cars they were travelling in nearly collided with vehicles they believe deliberately targeted them after $125 million (€108 million) worth of Russian mob caviar was seized by the FWS and tested by the lab.

When the shipment was found to be beluga, it was destroyed for exceeding limits set by Cites on harvesting from endangered sturgeon.

Nodding in the direction of a sealed picnic cooler that had passed through the scanner, Goddard says, “All evidence comes by mail or FedEx. We get two to three shipments a day. There are scores of wildlife agents based across the US and at ports of entry. There are 400 police crime labs in the country, but only one dealing with wildlife. This serves Cites signatory countries, including Ireland and the EU.

“We receive more and more cases from abroad,” he adds, “[Initially] this was only 1 per cent of our work.”

Goddard travels on missions to Asia and Africa where FWS attaches are posted in US embassies in Tanzania, South Africa and Gabon. Their job is to train wildlife rangers to conduct crime scene investigations. “All crime scene labs examine evidence and link crime scenes to perpetrators. The wildlife lab also distinguishes between legal and illegal kills,” he states.

In one room, deputy director Ed Spinoza and his team stand around a large table laid with pieces of elephant, walrus and narwhal ivory in preparation for a workshop on ivory at this month’s meeting in Denver of the Society For Wildlife Forensic Science. “Mammoth ivory is legal because [the animal] is extinct,” Goddard observes.

Further along, a preserved pangolin rests on a tabletop beside a box of pangolin scales, which in Africa and Asia are falsely believed to have medicinal properties. Its scales and meat make this endangered creature the most trafficked on Earth. Scores of South American macaws, their bright scarlet, blue and yellow plumage undimmed in death, lie in the drawers of a chest.

A former California CSI cop tired of digging for human remains in shallow graves, Goddard was hired in 1979 to set up the lab. It took a decade to raise money, select the site, build and open the lab with 10 staff. It now has 32, half scientific, the rest clerical and technical.

The lab has a sealed examination room for dealing with contaminated material, an autopsy suite, a ballistics room to identify bullets by firing weapons into a water tank, equipment that can trace DNA, freezers containing 25,000 DNA samples, a Cat scan, a pesticide lab and a machine that can determine chemical compounds in timber.

A new wing to house the vast collection of specimens is under construction. The lab receives 10,000-15,000 items a year.

Since 1989, lab scientists have testified in 18,000-19,000 court cases. A major case involved identifying millions of euro worth of rhino horns stolen from British and European museums for smuggling to China by the “Dead Zoo Gang”, also known as the “Rathkeale Rovers” due to their connections with the Co Limerick town. Gang members were convicted of conspiracy and in 2016 sentenced to varying terms of imprisonment.