Hong Kong activists appeal to world leaders ahead of G20 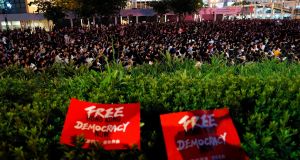 Demonstrators attend a rally in Hong Kong ahead of the G20 summit in Japan, urging the international community to back their demands for the government to withdraw the extradition Bill. Photograph: Tyrone Siu/Reuters

Activists opposed to a controversial extradition Bill urged world leaders on Wednesday to help “liberate” Hong Kong and take their plight up with Chinese president Xi Jinping at the upcoming Group of 20 summit in Japan.

Wearing T-shirts and carrying placards saying “Liberate Hong Kong” and “Free Hong Kong from China Colonisation”, groups of protesters marched to the US, EU and several other consulates in Hong Kong to deliver petitions.

On a crowdfunding platform, more than 22,000 people donated €750,000 over the course of a few hours to run advertisements in the Financial Times, the New York Times, the Japan Times and at least 10 other international newspapers this week to draw more international attention to the situation.

The advertisement will carry a letter titled “Save Hong Kong at G20”, which states that under the proposed law “Bankers, businessmen, tourists and even ordinary Hongkongers could be sent to China for trials for alleged crimes and fabricated accusations. Hong Kong will cease to be a free economic zone, which has long served the world’s businesses. This is why two million of us took to the streets.”

It adds that China is “notorious for its disrespect for rule of law” and its judicial system has “a conviction rate of 99.9 per cent and prisoners are known to have suffered from serious violations of human rights”.

Hong Kong’s chief executive Carrie Lam announced a suspension of the Bill and apologised for her poor handling of the matter, but the protesters are demanding that the Bill be completely withdrawn. They are also calling for all the arrested protesters to be released unconditionally, and an independent inquiry to look into incidents of police brutality.

“We were unarmed. We only had helmets, umbrellas and plastic wrap. In return the police suppressed us by unleashing 150 tear gas canisters shot in close range, aiming batons at our heads, and firing rubber bullet and bean bag rounds,” the letter states.

Ahead of the meeting between US president Donald Trump and Mr Xi at the G20 in Osaka, the letter urges international leaders “to stand with us in preserving Hong Kong’s freedom and autonomy under the Chinese rule”.

Mr Trump has indicated he will bring up the protests at the meeting, but Beijing insisted earlier this week that Hong Kong was an internal Chinese matter and the extradition issue would not be on the agenda. Zhang Jun, an assistant foreign minister, said: “I can tell you that for sure the G20 will not discuss the issue of Hong Kong and we will not allow the G20 to discuss the issue of Hong Kong.”

British foreign secretary Jeremy Hunt said on Tuesday the UK had urged Hong Kong’s leaders to launch a full investigation into the violence against protesters, and Britain would be putting a temporary hold on export licences to Hong Kong for tear gas and other crowd control equipment until they were satisfied human rights concerns had been addressed.

Speaking in Beijing on Wednesday, China’s foreign ministry spokesman Geng Shuang criticised Mr Hunt for “irresponsible remarks” and said: “We urge the British side to immediately stop interfering in Hong Kong affairs and China’s internal affairs in any way.”

On Wednesday night, several thousand protesters gathered for another mass rally in central Hong Kong. Aside from the large-scale marches and rallies, activists have occupied government buildings and besieged the police headquarters in recent weeks, plunging Hong Kong into its deepest political crisis since Britain’s withdrawal in 1997, and the biggest public challenge to Mr Xi’s government since he took control seven years ago.