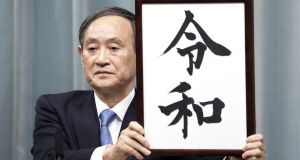 Japan has unveiled the name of the new imperial era that will begin when Prince Naruhito becomes head of the world’s oldest hereditary monarchy next month.

Reiwa, comprising of two Chinese characters that can be read “order” and “peace”, replaces Heisei (“achieving peace”), the title of the current era under Naruhito’s father, Emperor Akihito.

Akihito (85), who is in failing health, will become the first Japanese emperor to abdicate in about 200 years at the end of this month, bringing down the curtain on his 30-year reign.

Scholars of classical literature and history spent months debating in secrecy what to call the new era. A panel of experts and senior politicians also weighed in before Japan’s top government spokesman, Yoshihide Suga, held up the name on a placard on live TV on Monday.

Media reports said the experts were asked to surrender their mobile phones to stop the name leaking early.

Prime minister Shinzo Abe said the name signifies “a culture being born and nurtured by people coming together beautifully”. Earlier he told reporters he hoped it “would lead to a new era brimming with hope”.

Japan still uses its Imperial calendar along with the western calendar for many official documents. The tradition of era names is reportedly over 1,300 years old, with the most modern ones coming posthumously to describe the zeitgeist.

The Heisei era, which began just as Japan’s speculative economy peaked in 1989, is considered a period of relative economic stagnation and decline that many Japanese will not be sorry to leave behind.

The 63-year reign of Akihito’s father, Hirohito, posthumously dubbed “Showa” or enlightened peace, was marked by militarism and the disastrous war of 1933-1945, followed by the “miracle” years, when Japan rose to become the second-most powerful economy on earth.

The new era name will go into effect at the stroke of midnight on May 1st, when Crown Prince Naruhito officially becomes the nation’s 126th emperor.

Japan’s government said the name Reiwa is taken from the nation’s oldest compilation of native poetry, known as “Manyoshu.” Mr Abe said the classical anthology was chosen because it “symbolizes the rich culture of the people and the nation’s long traditions”.

Others detected an authoritarian ring to the name, however, given that it incudes the character for “order” or “command”. The second part of the name is a throwback to the Showa era of 1926-1989, which many of the prime minister’s conservative supporters revere.

Mr Abe said he hoped the name will “take root among the public and be widely accepted by the people”.