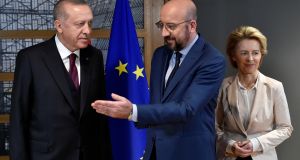 EU chiefs said they held “different opinions” on the implementation of a deal between the bloc and Turkey to prevent migrants from reaching the European Union after meeting Turkish president Recep Tayyip Erdogan in Brussels on Monday evening.

Mr Erdogan was visiting to pressure Europe and Nato for more support in the Syrian war and migration crisis, after encouraging thousands of people to mass at its border with Greece to try to reach the European Union.

EU chiefs had hoped to persuade Mr Erdogan to reverse his abandonment of a deal to hold back migrants in return for financial aid.

“Clearly we have our disagreements,” said European Commission president Ursula von der Leyen after the meeting. “We must now focus to find our way forward.”

Talks are to continue in the coming days between EU foreign policy chief Josep Borrell and his Turkish counterpart Mevlut Cavusoglu on what aspects of the deal Turkey believes have been unfulfilled.

Ankara accuses the EU of failing to deliver on the deal, in which it promised to ease visas to Europe for Turkish citizens and to fast-track EU membership talks that have stalled since they formally began in 2005. Brussels says it has so far paid about half of a promised €6 billion to help Turkey finance housing, schools and medical centres for the refugees on its soil, and has dangled the prospect of more.

The accord largely quelled the 2015-2016 migration crisis, in which more than one million people mostly from the Middle East and Asia reached the EU via Turkey and Greece. The administration of Ms von der Leyen is determined to avoid a repeat.

The commission president has stressed solidarity with Greece as Athens responded forcefully to the pressure at its borders, suspending asylum applications, teargassing the crowds at the border, and beating back boats of people who tried to reach the Greek islands.

Turkey is host to 3.6 million Syrian refugees, a number it believes will rise due to a vicious spiral of conflict in Idlib across its border, where the Nato member is locked in conflict with the Russian-backed regime of Bashar al-Assad.

Bombing there has targeted civilians and rendered much of the province uninhabitable, causing almost a million people to flee, according to the United Nations.

Mr Erdogan said Turkey was shouldering a heavy burden and needed support when he met with Nato secretary general Jens Stoltenberg in Brussels.

“The Turkish-Syrian border is also the southeastern border of Nato. The crisis that is originating from Syria is a threat against our region, and actually against the whole of Europe with its security and humanitarian dimensions,” Mr Erdogan told reporters after meeting Mr Stoltenberg.

“No European country has the luxury to remain indifferent to the clashes and the humanitarian tragedy in Syria.”

Conditions are deteriorating in Greek refugee camps, which are home to tens of thousands and have been the focus of some local hostilities after new arrivals began to increase.

France, Portugal, Germany, Luxembourg and Finland have offered to take in some of the 1,000-1,500 unaccompanied minors living in dire conditions there, the EU announced on Monday.

On Sunday, Mr Erdogan made a speech calling on Greece to also open its borders and allow people to travel onwards into the richer states of Europe.

“Open the gates as well and be free of this burden. Let them go to other European countries,” the Turkish president said in a speech in Istanbul.

EU leaders have accused Mr Erdogan of using vulnerable people as a political tool, in an attempt to blackmail the EU for favours.

“The events at the Greek-Turkish border clearly point to politically motivated pressure on the EU’s external border,” Ms von der Leyen said ahead of the talks in Brussels.

“Finding a solution to this situation will require relieving the pressure that is put on the border.”