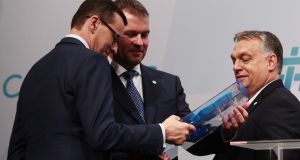 Four central European countries have said they will not attend an EU mini-summit on migration this weekend, and joined Austria in urging the bloc to focus on boosting border security rather than distributing refugees among member states.

Leaders from Hungary, Poland, the Czech Republic, Slovakia and Austria met in Budapest on Thursday and reaffirmed their view that tougher anti-immigration measures must be the EU’s priority in its search for a coherent asylum policy.

“Europe must be able to protect its borders and guarantee the security of its citizens,” said Hungarian prime minister Viktor Orban, whose country – like Poland and the Czech Republic – faces EU legal action for refusing to accept a quota of refugees.

Both Czech premier Andrej Babis and Austrian chancellor Sebastian Kurz called for the EU border agency Frontex to be significantly bolstered, to ensure no repeat of the 2015 migration crisis that saw more than one million people enter the EU via Turkey and the Balkans.

“We have to have a Europe capable of defending us . . . We have to strengthen Frontex, to protect our external border and ensure internal freedom,” said Mr Kurz.

Writing later on Twitter, Mr Kurz added: “We need to put aside the debate on distribution [of refugees] and focus on protection of the external border, on which there is already great consensus among EU member states.”

That debate has raged since 2015, with Germany leading calls for all EU members to take refugees to ease the burden on entry points like Greece and Italy, while Mr Orban has built border fences and led resistance to any quota scheme.

Leaders across central Europe and in Austria and Italy now broadly share Mr Orban’s views, as migration returns to the top of the agenda for next week’s EU summit.

The weekend meeting was called by the European Commission in response to threats from German interior minister Horst Seehofer to deny entry to the country to all asylum seekers who have been registered elsewhere, unless a bloc-wide deal is found at the summit.

That could trigger problems in nearby states where migrants find themselves stranded, and destroy the fractious coalition in Germany between Mr Seehofer’s Christian Social Union and chancellor Angela Merkel’s Christian Democrats.

“We understand there are domestic political difficulties in some countries but that cannot lead to pan-European haste,” Mr Orban said, adding that he and the leaders of Poland, Slovakia and the Czech Republic would not to attend the weekend talks; Mr Kurz is expected to take part.

The leaders met a day after Hungary passed legislation to allow the imprisonment of people who help illegal migrants and to bar any “alien population” from being settled in the country.

“The constant stoking of hatred by the current government for political gain has led to this latest shameful development, which is blatantly xenophobic and runs counter to European and international human rights standards and values.”

Separately, Italian prime minister Giuseppe Conte said on Thursday a draft EU accord on migration had been withdrawn following a clash between himself and Germany over the issue .

The contested joint declaration was drawn up ahead of Sunday’s mini-summit, with Germany and France hoping for a swift deal that could then be approved at next week’s full EU summit.

It contained key elements Dr Merkel needs to placate the Christian Social Union. But Rome objected to provisions that said asylum seekers would have to be returned to the EU country they had first logged their claim in, which often means Italy.

Mr Conte, who had threatened not to go to Brussels on Sunday unless the draft declaration was amended, spoke to Dr Merkel on Thursday.

“The chancellor clarified that there had been a ‘misunderstanding’. The draft text released yesterday will be shelved,” Mr Conte wrote on Facebook, adding that he would now go to Brussels. – Additional reporting Reuters