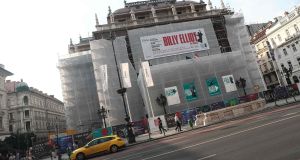 The Hungarian National Opera in Budapest, which announced that it had to cancel 15 performances of the musical Billy Elliot following a homophobic press campaign. Photograph: Ferenc Isza/AFP/Getty Images

The Hungarian state opera has scrapped some performances of the musical Billy Elliot following claims from pro-government media that it was “gay propaganda” that could turn children to homosexuality.

The cancellations come amid a crackdown by nationalist prime minister Viktor Orban on targets ranging from refugees to Hungarian civil society groups to progressive academic institutions.

While Mr Orban’s critics see Billy Elliot as another victim of rising illiberalism in Hungary, the opera’s general director Szilvester Okovacs said commercial rather than political pressures were behind the change to the schedule.

“As you know, the negative campaign in recent weeks against the Billy Elliot production led to a big drop in ticket sales and for this reason we are cancelling 15 performances,” Mr Okovacs wrote in a letter to colleagues which was published by Hungary’s 444.hu news outlet.

“It is not a national goal to promote homosexuality in a situation where the population is decreasing/ageing, and our country is threatened by foreign invasion,” the newspaper wrote, echoing Mr Orban’s stance on immigration.

“Billy Elliot . . . runs completely counter to the state’s objectives, and exposes children at the most tender age of about 10 years old to such penetrating, rampant gay propaganda.”

Mr Okovacs said there would still be 29 performances of the show – which is based on a successful British film and a musical written by Elton John – and that the only reason for the cancellations “is that the public’s interest has decreased”.

“I have been managing the opera for eight years now. I have never experienced any kind of pressure.”

Since Mr Orban re-took power in 2010, his allies have taken pre-eminent positions in business, media, culture and the judiciary in Hungary, with state and private cash increasingly flowing to government-approved individuals, companies and institutions. At the same time, critics are being sidelined and starved of funds.

“The leaders of Hungarian state institutions are avoiding conflict with the government,” said award-winning Hungarian theatre director Arpad Schilling, who now only works abroad and is preparing to move from Budapest to France.

“The situation is terrible, shameful and unbearable. That’s why I’m leaving the country. If there was a real fight against the reigning power, I would stay, but there is not any – the Hungarian intellectuals capitulated.”

A pro-Orban publication also attacked the Hungarian Academy of Sciences this month and suggested its members spent too much time and taxpayers’ money researching “gender subjects and homosexuality”.

The renowned Central European University – which could be forced to leave Budapest by Mr Orban’s reforms – expressed solidarity with the 193-year-old academy, which also faces government threats to its funding and independence.

1 Coronavirus: Husband unable to say farewell to wife of 51 years
2 Coronavirus: State should ‘be looking seriously’ at closing borders
3 People should carry ‘evidence’ of travel reasons if exceeding 2km limit
4 Man who allegedly spat at garda brought to court by gardaí in protective gear
5 Trump boasts of coronavirus ‘ratings’ as top expert warns of up to 200,000 US deaths
Real news has value SUBSCRIBE