Italy’s Matteo Salvini: the European leader most like Trump 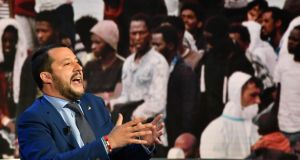 Italy’s interior minister and deputy prime minister Matteo Salvini: those who knew him believed he was a true ideologue. Photograph: Andreas Solaro/AFP/Getty Images

In the early years, when he was still a secessionist who believed northern Italy should break off and become an independent state called Padania, Matteo Salvini held his fellow countrymen in such contempt that he even supported Germany over Italy in the 2006 World Cup.

“Italy ... is the worst of the worst,” he said at the time. “My support goes to anyone who is more serious.”

Today, the 45-year-old has adopted “Italians first” as a political ideology and is in many ways the European leader who most resembles Donald Trump, from his embrace of impulsive and often racist rhetoric, to his rejection of democratic norms. He has served as Italy’s interior minister and deputy prime minister for less than a month, but has already upended policies on migration and asylum.

Salvini’s responsibilities are technically limited to oversight of immigration, elections and domestic security. But the head of the League – or Lega Nord as it was known in Italy – has deftly used his political skills, including stoking fear of immigrants, to overshadow the country’s weak new prime minister, Giuseppe Conte, and outshine his 31-year-old coalition partner, Luigi Di Maio of the Five Star Movement, who has seemed to fumble through his first weeks in government.

On Friday Salvini unofficially took on the role of health minister, saying in an interview that he considered 10 vaccines to not only be useless but potentially dangerous. It was a much harder line – taken without any scientific proof – than the government’s agreed position, which is that vaccines ought not to be mandatory for children to attend school.

The question now is how far Salvini – the political chameleon – will go, and how high his popularity will grow. The answer could shape the future of Europe, and Italy’s role in the euro zone.

Will the man who was once seen as a fringe candidate who could not possibly win more than 12-13 per cent approval rating – but whose popularity has soared by more than 10 percentage points to 30 per cent since Italy’s election in March – bring together centre-right and populist voters? Or will he follow the path set by former prime minister Matteo Renzi, who soared and then collapsed under the weight of his own hubris?

Salvini’s political story began in the 1990s on the far left, when anti-globalisation protests formed the basis of his populism and he headed a small communist faction within the Northern League. The party was neither left nor right but instead was unified by its militant belief in secession and often infused its campaigns with blind hatred for southern Italians. Salvini was once recorded chanting a derogatory song mocking Neapolitans, saying they “smell so bad, even the dogs run away”.

He was born into a middle-class family in Milan and did not – according to his biographer Alessandro Franzi – have an especially promising future in a party commanded by strong leaders.

But Salvini’s first major break came as a talk radio host at Radio Padania. He developed a quick-fire style he still uses today, in contrast to the stereotypically measured, cautious and long-winded Italian political establishment.

“I think his first ability is to be a good communicator. He was the voice of the Northern League in the late ’90s, and there he learned the ability to talk, to speak in public, to listen to people and to give voice to people’s problems. He tried to give dignity to the voice of people,” said Franzi.

“Salvini could have been the leader of a trade union. He studied but he didn’t finish university and does not have a degree. In a sense he epitomises the populist figure,” said Sergio Fabbrini, a political scientist at Luiss University.

The common enemy was southerners, who were blamed for dragging down the country, much as migrants are today. Then, in 2012, a disastrous turn for the Northern League led to its near-collapse, and a golden opportunity.

Umberto Bossi, who ruled the party for three decades, was forced out by a party funding scandal. A year later, when the league had hit a low of about 4 per cent approval, Salvini took over and decided to abandon the secessionist Padania fantasy. He turned the party around.

Eventually, he would travel to Naples and apologise for the Northern League’s diatribes against southern Italians.

Under his watch, the league also flirted with the neofascist fringes, like the CasaPound movement in Rome. In street rallies in 2014 and 2015, the league and CasaPound would often appear together, and Salvini began to adopt neofascist slogans such as “Italians first” and “Italy for the Italians”.

“But he understood that those links with the extreme right were dangerous for him. He stopped their dialogue, and said he did not want to make an [official] alliance. But he did not change the slogans,” said Franzi, the biographer.

Even today there are loose links with such groups at a local level, analysts say.

As he sought to gain acceptance, mostly by launching fierce attacks against “invading” migrants and by threatening to raze Roma camps, Salvini was usually outmanoeuvred by Silvio Berlusconi, the polished former prime minister with whom he had a bitter rivalry. Although they worked together in a coalition, Berlusconi seemed to see his young partner as little more than an errand boy.

It was Salvini who had the last laugh. Berlusconi – a billionaire who had been dogged by legal troubles for more than a decade – suffered a collapse in his support in the March 4th election and the league emerged as the biggest party within the centre-right coalition, with about 17 per cent of the vote. It was far behind the Five Star Movement’s 33 per cent but strong enough to enter government as a coalition partner.

In the weeks that followed, Salvini refused to let Di Maio become prime minister, and the pair ultimately agreed to name Conte, an unknown lawyer, as premier. It created a power vacuum.

Salvini started dominating headlines, first by his decision to block an NGO ship carrying more than 600 migrants from landing in Italy, and then by announcing a new – unconstitutional – plan to create a census of the Roma community.

Noemi Di Segni, the president of Italy’s union of Jewish communities, said the proposal recalled the fascist race laws of the late 1920s and 1930s. Di Maio briefly voiced objections, but then seemed to backtrack, saying it was the constitution – not him personally – who disagreed with the plan.

Salvini has denied being racist or holding fascist views. But his most important allies are espousing a far-right ideology: Steve Bannon, the former Trump strategist, Nigel Farage in the UK, Marine Le Pen in France, and Hungary’s rightwing prime minister, Viktor Orban.

Salvini has also expressed admiration for the Russian president, Vladimir Putin. Last year he travelled to Moscow, where he agreed a “collaboration” with the deputy speaker of the Russian parliament, Sergei Zheleznyak, who was put under sanctions by the EU in 2014 for his role in Russia’s war over Crimea.

Giovanni Orsina, a political historian, said those who knew Salvini believed he was a true ideologue, and not using his war against migrants as a political instrument.

“If you see the performance of the league, it matches the growth of migrants in Italy. There is a very strong connection. Once he started getting the votes, it all went very fast,” Orsina said. – Guardian