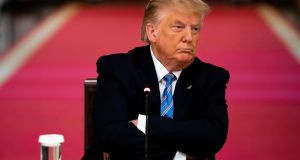 US president Donald Trump: Scrutiny of his business dealings was always going to be a danger zone for him. Photograph: Anna Moneymaker/New York Times

Two long-awaited rulings by the US supreme court related to Donald Trump’s tax records may have delivered mixed signals to the president. But on balance, they buy the president more time and ensure that his financial records will not be in the public domain for some time to come.

The first judgment issued on Thursday ruled that the president must submit his financial records, via his accountants Mazars, to New York prosecutors. But crucially, the issue has been bounced back to a lower court, which means the legal battle is not over.

The second ruling was more of a victory for the president, as the court blocked congressional committees from gaining access to his records, stating that the matter should be decided by a lower court. As a result, the ultimate outcome will be inconclusive for some time, even though Nancy Pelosi said that Congress would continue to fight in court.

Both cases explored complex constitutional questions about presidential power and the legal protections given to those who reside in the White House.

As was the case for Richard Nixon, who was obliged to turn over the Watergate tapes, and Bill Clinton, who lost the executive privilege argument when the supreme court barred him from postponing a lawsuit by Paula Jones, Thursday’s judgment in the New York case put down an important legal marker about the limits of presidential privilege.

The New York case is worrisome for the president.

The probe into his business dealings was always a danger zone for Trump. The Manhattan district attorney Cyrus Vance subpoenaed eight years of documents after Trump’s former lawyer Michael Cohen testified in Congress and was indicted.

Among Cohen’s allegations was that Trump altered the valuation of assets to lower his tax liability. Vance said on Thursday he would continue his investigation, and Cohen, who was temporarily released from prison in May due to coronavirus, was taken into custody the same day.

While a fast-tracking of the case is possible, there are unlikely to be major developments before November’s election. But citizen Trump is ultimately likely to face a legal reckoning with the New York investigation, whether he leaves office in 2021 or 2025.

The fact that Trump switched his official address from New York to low-tax Florida late last year indicates that the president wants to wave the city of his birth goodbye. The ongoing investigation by the Manhattan district attorney means that leaving behind his home town may be more difficult than he thinks.