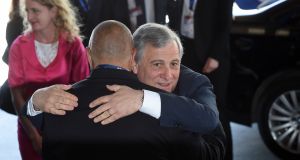 We are gathering once again in Sofia, the Bulgarian capital, to do justice to its EU presidency priority, celebrating and reaffirming the “European perspective” of the nations of the western Balkans. Though it’s not to be said out loud, what is meant is the “E” word, enlargement – eventually – of the EU.

It’s the first time in 15 years that the union has had such a joint summit with the WBs, a reality not unconnected with the enlargement fatigue that set in with the last economic crisis and which has not been shaken off. Croatia slipped in since then, unnoticed, but that’s it!

So although Serbia and Montenegro are formally involved in accession negotiations, like those for Turkey, these are as endless as the proverbial piece of string.

And the EU will almost certainly agree to open the same endless negotiations with Macedonia (sorry, the Former Yugoslav Republic of Macedonia, or Fyrom, to give it its correct title) and Albania in June. As for Bosnia Herzegovina and Kosovo, well the “perspective” is very, very long.

In each of the six Balkan states, moreover, the pre-accession reform programme to bring their economy and administrative systems into line with the EU has barely begun, and is hugely arduous.

As a helpful journalist pointed out during a Brussels briefing this week on the summit, 15 years ago at Thessalonika the EU managed to mention the “E” word in the summit conclusions. How come, if everything is as rosy as the European Commission likes to suggest, we are only talking “perspective” this time?

Yet, remarkably, they’ll all be here today, and grateful, all understanding that the “E” word will not be mentioned. We are talking instead about assistance to “connectivity” in the region – infrastructure, motorways, airports, broadband, people – things the EU does really well.

Even getting here, however, hasn’t been easy. Five member states of the union don’t recognise Kosovo as a state – Spain, Greece, Slovakia, Romania and Cyprus – and such is his concern not to give the slightest comfort to secessionism at home (ie Catalans, for those of you who have not been concentrating), Spanish prime minister Mariana Rajoy is actually boycotting the gig on Thursday.

Serbia has been prevailed on to attend, but only just. But its casus belli with Kosovo is far more than just recognition. The Serb minority in northern Kosovo, supported by Belgrade, is in a state of permanent insurrection against rule from Pristina.

And bitterly embattled Greece and Macedonia will be meeting on the sidelines to see if they can hammer out an agreement on the latter’s name. North Macedonia? Upper Macedonia? No sign of white smoke yet. (Greece sees simple “Macedonia” as an expression of implied expansionist ambitions on its neighbour’s part, and will certainly block any further talk of its accession to the EU if the name issue is not resolved.)

It’s not all loggerheads, however, as a senior EU source pointed out to us in determinedly pot-half-full mode. Recently Bulgaria and Macedonia have signed a friendship treaty to resolve longstanding fractious differences. And Kosovo and Montenegro have agreed on a process for resolving disagreements over a border demarcation deal between the two countries.

But then there’s also poor Bosnia Herzegovina struggling with its unresolved ethnic divisions and a powersharing-based political system that is barely surviving.

Occasionally someone pipes up to say that of course no one is going to be admitted to the EU while they are actively in dispute with their neighbour or have unresolved border issues. These are not disputes that the union would contemplate importing, though it did make an exception for Cyprus.

And there’s nothing to stop a member state once admitted from picking such fights and then expecting the union to side with it (Greece comes to mind).

A century ago, the Ottoman empire lost the Balkans from its sphere of influence and since then they have drifted rudderless, rooted in neither East nor West, gripped by poverty and unable to shake off the poison of nationalism and the wars it has fuelled.

European leaders have expressed concern over Turkey’s expanding influence in the western Balkans, particularly since Ankara has taken a more authoritarian turn. Speaking to the European Parliament last month, France’s president, Emmanuel Macron, put Ankara and Moscow in the same bracket, saying he did not want the Balkans to “turn towards Turkey or Russia”.

There’s a lot at stake in Sofia – the EU’s determination to show the Balkan six that they have a future in its ambit is as much about demonstrating the effectiveness of the union as a peace project in this troubled region as with securing its own borders. Strategic and humanitarian imperatives merge.