‘What a sad election’: French voters reflect on a divisive campaign

In Paris’s 12th district, only one voter is enthusiastic – and no Le Pen voter can be found 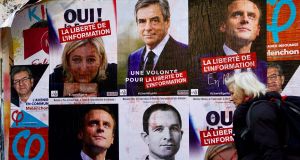 Every leading candidate in the first round of the French presidential election promised a revolution in French politics, so I talked to voters where the original revolution started, at the Bastille.

A few hundred metres from the site of the prison that was stormed on July 14th, 1789, residents of Paris’s 12th district queued in front of the Théophile Gautier school to be searched for weapons or explosives before voting.

In about 20 interviews over two hours, the largest number believed that the independent centrist Emmanuel Macron would be elected France’s next president in the second round on May 7th. But the far left candidate Jean-Luc Mélenchon came a close second.

Only one voted for the conservative François Fillon, and I found not a single supporter of the Front National leader, Marine Le Pen. Perhaps polls overestimated Le Pen’s strength, or perhaps it was elsewhere, among the poor whites of la France périphérique – suburban and rural zones that feel abandoned by the central government.

I found only one truly enthusiastic voter, and even she said she voted for Macron as a second choice. “My heart is on the left,” said Violaine (52), a civil servant at the defence ministry. “I would have voted for [the official socialist candidate] Benoît Hamon, if it weren’t for the threat of the Front National.”

After peaking at 15.5 per cent in polls, Hamon fell to 8 per cent, as Mélenchon and Macron pulled his voters further left or towards the centre. “There’s a megalomaniac, personality cult side to Mélenchon that I don’t like,” said a Hamon voter. “What is more, he’s against Europe. But he’s a great orator.”

“The important thing for me is to block Le Pen,” Violaine said. “Macron will be elected thanks to Le Pen. He’s a brilliant intellectual, and I think he’ll be a good president. He’ll modernise France. He’ll simplify things like the labour law and the tax system. He’s young and dynamic, and he makes you want to want something. He’ll bring people together.”

Violaine’s friends in the US sent her John Oliver’s comic video about the French election on HBO, which went viral in France. “Some of my friends were annoyed he made fun of us for eating snails and frog legs. But I was touched that Americans care so much about the French election. John Oliver begs us not to make the same mistake the US did. I wrote back, “No. We won’t f*** up. I believe in the intelligence of French people.”

Violaine thought either Macron or Fillon would face Le Pen in the run-off. Much as she dislikes Fillon, she could understand why people would vote for him. “I don’t understand how people can vote for Le Pen, who is xenophobic and racist,” she continued. “She wants to shrink France into a little country with only blond, blue-eyed people. Though I am blonde and blue-eyed, I am ashamed that Le Pen has done so well in the polls.”

I’m surrounded by people at the defence ministry who vote Le Pen. They say there are too many Muhammads and Moulouds

Le Pen is the only candidate who wants to raise defence spending to 3 per cent of GDP. Polls show a majority of police and military vote the FN. “I’m surrounded by people at the defence ministry who vote Le Pen,” Violaine continued. “They say France is beginning to look like Bombay, which isn’t entirely false. They say there are too many Muhammads and Moulouds. They think they’re making a protest vote, that they’re saying merde to the system.”

Jean-François (70), a retired middle-ranking oil executive, and his wife, Nicole (60), were life-long conservative voters. He did not vote on Sunday. She voted blank. “We voted for Fillon in Les Républicains’ (LR) primary,” Jean-François explained. “We were so disappointed by him . . . I have no idea who the next president will be, though if you believe the media, it’s Macron.”

Fillon’s wife and children received more than €1 million in salaries for allegedly fake jobs at the National Assembly, senate and for a literary review belonging to one of Fillon’s rich benefactors. The LR candidate also accepted €50,000 worth of bespoke clothing in gifts.

“This is the first time I’ve voted blank,” Nicole said. “I don’t like any of the candidates. What a sad election. It’s been a desperate campaign. Fillon wrecked it completely. I couldn’t vote for him now, not even against Le Pen.”

I told Léa (84), a retired trapeze artist, and her neighbour Jean-Marie (60), a special education worker, that I was encountering difficulty finding a Le Pen voter. “It’s certainly not us,” Jean-Marie said. “Léa’s father and family died at Auschwitz. And Marine Le Pen says France wasn’t responsible for deporting Jews from the Vél d’hiv.”

They feared a run-off between Fillon and Le Pen, “a choice between plague and cholera”, Jean-Marie said. “If that happens, we’ll abstain.”

Fear of the FN has forced many voters into complex calculations. Laura (38), a civil servant, wanted to vote for the socialist Hamon, but instead cast her ballot for Macron. “Many of my friends are voting for Macron, without conviction,” she said. “I hesitated until four days ago. I was haunted by the 2002 election, when I didn’t support [the socialist candidate Lionel] Jospin, and Jean-Marie Le Pen made it to the run-off. I couldn’t stand a second round between Fillon and Le Pen. I’d have to abstain.”

Fillon, Laura continues, is not Jacques Chirac, the conservative incumbent who defeated Le Pen’s father by 82 to 18 per cent in 2002. Fillon’s intention to bring into government representatives of traditionalist Catholic movement Sens Commun that fought same-sex marriage was “the last straw”, Laura said. “He’s meddling in people’s private lives. Politicians shouldn’t be interested in people’s sexuality.”

“Fillon is a Christian fundamentalist Catholic who doesn’t believe in abortion in a civilised country like France,” said Damien (34), a nurse. “That scares me.”