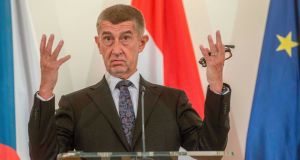 Czech Republic’s prime minister Andrej Babis: “Member states should have the ability to decide on their own about which areas they want to spend these resources on.” Photograph: Michal Cizek/AFP

Sixteen European Union countries have called for the bloc’s next budget to maintain current levels of financial aid to less affluent member states and to give them more flexibility in how they spend these so-called cohesion funds.

Representatives of the eastern and southern European states, including several prime ministers, met in Prague on Tuesday to align their positions ahead of what are likely to be fractious talks on the EU’s spending plans for 2021-2027.

Brussels and wealthy members including Germany suggest cohesion funds could be reduced and come with tighter conditions, amid concern over corruption in EU-financed projects. Some member states also want to link aid to respect for the rule of law, which Poland and Hungary in particular are accused of undermining.

“The current [European] Commission made a proposal that is not fair,” Hungarian prime minister Viktor Orban said. “The new proposal wants to reduce cohesion – in other words the poorer will get less and the richer will get more.”

His Polish counterpart, Mateusz Morawiecki, said poorer EU states “must convince those richest countries, which have had more luck in history – like the Netherlands, Denmark, Germany or France – that the sharing of costs is just.”

Czech premier Andrej Babis said Britain’s planned exit from the EU should signal an end to the payment of all rebates and “corrections” to certain states.

“The rebates must go. That is €14.5 billion for the next budget period, excluding Britain,” he declared.

“We have to rid ourselves of the administrative burden that is connected with EU funding. Member states should have the ability to decide on their own about which areas they want to spend these resources on,” Radio Prague quoted Mr Babis as saying.

They said in a statement that it was “vital to safeguard the funding for the cohesion policy at the level of 2014-2020 [budget] in real terms”.

“Moreover, it is crucial to strike a balance between the common EU targets and the possibility for member states to allocate resources in accordance with their national and regional priorities, needs or changing circumstances.”

Leaders of the Visegrad group – Poland, the Czech Republic, Slovakia and Hungary – also held talks on the sidelines of the summit and criticised the EU’s recent decision not to open membership talks with Albania and North Macedonia.

“It was a big mistake, because I believe that the enlargement is an investment for the EU. A good investment. Not only an economic but also a security one.”