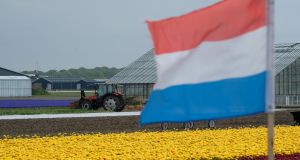 A survey of Dutch agriculture has come up with one unexpected finding: that 15-20 per cent of farmers have been approached by drug-dealing gangs willing to pay large amounts of cash to use empty outbuildings on their land.

The extensive examination of the future of the industry – with exports worth more than €90 billion a year – found farmers often stretched to the limits of production, with high overheads, minimal margins, and a younger generation determined to find less-onerous careers.

By contrast, the drugs industry continues to thrive.

It has a nationwide network of “coffee shops” where cannabis is consumed legally although it is illegal to grow the plant. Rotterdam and Antwerp are global cocaine distribution points. And the country is one of the world’s main producers of synthetic drugs, such as ecstasy, most of them made at home.

As a result, drugs gangs are moving out of the cities where they’re most likely to attract police attention – and doing deals with hard-pressed farmers.

“Farm land is cheap at the moment, which means criminals with endless amounts of cash can get a lot for their money,” says Janus Scheepers of the farmers’ lobby, ZLTO.

“That means if you choose your location well, you can become almost invisible. And it’s much easier to dump waste from drugs manufacturing in a country ditch than in a city.”

The State of the Farmer survey by the newspaper Trouw found that 15 per cent of farmers had been approached by drug dealers – but the reality in some areas is much higher.

One example was 66-year-old Johann Gillis in the province of North Brabant, who said he turned down €25,000 a year for a barn, 26m by 11m, with four walls, a roof and no facilities.

Such a property might typically be used to grow cannabis or to manufacture ecstasy.

“They didn’t want a fuss. They asked. I said no. They walked away.”

Police, however, say every farmer in North Brabant – located between Rotterdam and Antwerp – knows someone who has given in.

They put the percentage of farmers there who have been approached at 20 per cent – at least.

“Many farmers are getting older, there’s nobody to take over the business, they’re in debt, and their buildings are lying empty,” said a police spokesman. “In that situation, it can be tempting, very hard to say no.”