Greece prepares to emerge from bailout but debt remains a millstone 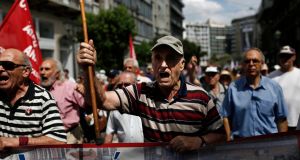 Greek pensioners take part in an anti-austerity rally in Athens this week. About two thousand pensioners took part in a rally to oppose government cuts to their pensions.Photograph: Yannis Kolesidis/EPA

When Ireland exited its EU bailout in December 2013 there was a national sigh of relief. For many, perhaps overstating the case somewhat, it was a day that marked the restoration of national sovereignty. Liberation, freedom, no less.

For Greece, a similar collective sigh of relief can be expected on Thursday when the finance ministers of the Eurogroup sign off in Luxembourg on its departure in August from its third “adjustment” programme, a three-year bailout that cost some €86 billion but which, ministers will say, has definitively put the country on a sustainable path to recovery.

Crucially, Athens will be able to point at the meeting to its delivery on 88 “prior actions”, “reforms” to every element of its economic and social programmes from social welfare and pensions, to a new land registry system, widespread privatisations and measures to deal with banks’ non-performing loans.

Public service numbers have been cut by a quarter, and public sector wage bills by 39 per cent. The price demanded by the EU for its generosity.

The Greek economy is looking up. Ten years into Greece’s Great Depression, which saw the economy decline by more than a quarter of GDP, the three successive adjustment programmes, funded by the euro zone and, initially the International Monetary Fund, at a cost of more than €300 billion, and implemented through brutal austerity programmes, are beginning to pay off.

Output is on course to grow by 1.9 per cent this year. Investors are becoming more confident, allowing Athens to return to the government-bond market, and the interest rate on the benchmark 10-year bond has fallen to roughly 4.5 per cent.

In 2009, Athens’s budget deficit stood at 15.8 per cent of gross domestic product. Last year, Greece ran a primary surplus (net of interest payments and other one-off payments) of 4.2 per cent and an overall surplus of 0.8 per cent of national income.

But debt and its repayment remain millstones around the country’s neck – some 179 per cent of GDP. And the real challenge at bailout exit is to persuade markets that its paydown is sustainable. If that can’t be done convincingly, the fear is that the cost of borrowing will soar and instead of declining the national debt will soar again.

The IMF pulled out of funding the last programme because it is convinced that Greece can’t repay its debt sustainably – the fund is forbidden by its statutes from lending to insolvent countries. It supported a substantial write-off of that debt but found the EU unwilling.

The challenge for the Eurogroup has been to come up with a credible exit strategy that allows Greece sustainably to face into the medium term with cash in the bank to meet its obligations and to buy back some of its debt – some of that IMF outstanding loan – at the low interest rates that currently prevail.

Ministers are expected to approve a final loan payment of between €10 billion and €12 billion and a cash buffer of up to €20 billion to provide liquidity for the medium term to the end of 2019. They will also approve the rescheduling of some further debt, pushing repayment dates back to the 2030s and 2040s, and writing off some interest due on loans to EU institutions. Expectations are that the time extensions on bonds will not exceed 10 years.

The detailed figures are yet to be agreed but EU officials are confident there will be agreement on the complex package. One said that the meeting could not be described simply as “ceremonial”, but that member states were “converging very rapidly”.

For Greece, “freedom” will not taste quite like the Irish freedom. Although everyone is adamant there won’t be a fourth programme with new “actions” required, the Eurogroup will nevertheless insist on maintaining a system of quarterly inspection missions to ensure that there is no backsliding in Athens on economic policy and implementation of prior commitments.

Visits from the commission will continue until Greece has paid back 75 per cent of the €230 billion it owes its euro zone creditors. Payments from Brussels will also be conditional on continuing to meet agreed timeframes.

But the formal exiting of the bailout is genuinely a landmark moment for the country worth celebrating and important for the EU at a time when its economic credibility and nerve may yet be tested by Italy’s new maverick government.

It should also give added momentum to attempts at the summit next week to complete the banking union and put in place more important elements of economic union whose raison d’etre flow in no small measure from the lessons of the crisis of 2008 and its Greek aftermath.