Brexit: May sees off backbench rebellion over ‘meaningful vote’ 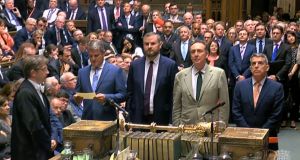 MPs line up to read out the vote in the House of Commons. Photograph: PA Wire

British prime minister Theresa May has seen off a rebellion by backbench Conservative MPs over the role of parliament in the event of a no-deal Brexit, winning a crucial vote by 319 votes to 303.

But the government’s victory came only after it made a statement promising parliamentary time to debate motions from MPs at the end of the Brexit negotiations and acknowledging that it would be for the Commons speaker to decide if its own motion could be amended.

Former attorney general Dominic Grieve told MPs that, following the government’s statement, he would vote against his own amendment to the EU withdrawal Bill calling for a meaningful vote in parliament on the Brexit deal.

“If this House chooses to debate matters, including matters on which it may wish to have multiple motions, the reality is that if we wish to exert our power to do that, we can. In the circumstances that might follow a “no deal”, which would undoubtedly be one of the biggest political crises in modern British history, if the House wishes to speak with one voice, or indeed with multiple voices, the House has the power to do so,” he said.

Opening the debate for the government, Brexit secretary David Davis said that writing a meaningful vote for MPs into the EU withdrawal Bill would weaken his negotiating hand in Brussels and make a no-deal Brexit more likely.

“There are plenty of voices on the European side of the negotiations who seek to punish us and do us harm – who wish to present us with an unambiguously bad deal. Some would do so to dissuade others from following us, and others would do so with the intention of reversing the referendum and making us lose our nerve and rejoin the European Union.

“If it undermines the UK’s ability to walk away, the amendment makes that outcome more likely. That is the paradox. Trying to head off no deal . . . is actually making no deal more likely, and that is what we are trying to avoid,” he said.

Wednesday’s vote removes the last major hurdle in the way of the EU withdrawal Bill, which repeals the act that brought Britain into the Common Market in 1973 and transposes EU law into British law. But Labour’s shadow Brexit secretary Keir Starmer said his party would continue to press for a meaningful vote for MPs at the end of the Brexit vote.

“This is a disappointing result and comes after Theresa May is forced once again to try to buy off her own MPs at the 11th hour. Labour has long argued that parliament should have a proper role in the Brexit negotiations and a meaningful vote on the terms upon which we leave the European Union. We will continue to make that argument and press our case at every opportunity.”