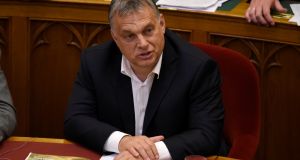 Hungarian prime minister Viktor Orban before the vote on the “Stop Soros” package of Bills, at the Parliament in Budapest, on Wednesday. Photograph: Tamas Kaszas/Reuters

Hungary has passed swingeing anti-immigration reforms to allow the imprisonment of people who help asylum seekers and to ban any “alien population” from being settled in the country, in a bid to prevent the EU sending refugees here.

Critics say the decision to hold the vote on World Refugee Day shows the cynicism of Mr Orban, who appears confident that outside powers cannot restrain him and that tough anti-immigration policies are now ascendant internationally.

One of the new measures imposes a jail term of up to one year on anyone who is deemed to have helped an illegal migrant seek asylum in Hungary – including individuals or groups that offer information or legal support.

Mr Orban calls the law “Stop Soros” because he claims – without providing substantive evidence – that billionaire Hungarian-American philanthropist George Soros is conspiring with the EU and UN to bring millions of Muslim migrants to Europe, with the help of liberal NGOs that he helps to finance.

Another change approved on Wednesday will make it all but impossible to receive refugee status in Hungary, by banning anyone from seeking asylum if they arrive directly from another country that the government deems to be safe.

Deputies also voted to amend the constitution to state that no “alien population” may be settled in Hungary, reinforcing Mr Orban’s long-standing opposition to EU plans to distribute refugees among member states.

Mr Orban built border fences to prevent refugees and migrants entering Hungary in September 2015, as more than one million people from the Middle East, Central Asia and North Africa trekked through the Balkans and into the EU.

He says Muslim immigrants are a danger to Europe’s security, culture and identity, and his strong anti-immigration rhetoric is now echoed by leaders in Austria, Italy, Czech Republic, Poland and elsewhere, including the United States.

Mr Orban ignored international criticism of his reform Bills and calls to postpone the vote until a full assessment of their legality had been made.

The Organisation for Security and Co-operation in Europe (OSCE) and the Venice Commission, which is the Council of Europe’s advisory body on legal affairs, warned that the Stop Soros Bill “criminalises activities that are fully legitimate”.

In a draft analysis of the Bill, they also said that it “may result in further arbitrary restrictions...of the indispensable work of human rights NGOs and leave migrants without essential services provided by such NGOs”.

The Bill “lacks the requisite precision... [and] is not in line with European standards,” they added.

“We will push back against the rising tide of institutional intolerance towards refugees, asylum-seekers and migrants and the attempts to stigmatise, intimidate and frighten Hungarian civil society organisations,” she added.