Disturbing question of Greek identity rears its head over Macedonia

Greece Letter: Country risks getting bogged down in history when it needs a new future 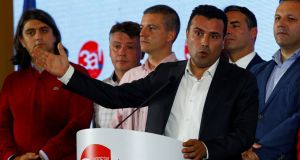 The referendum in Macedonia on September 30th was a massive Yes vote for a change of name to “Republic of North Macedonia”, but the low turnout (less than 40 per cent) is being interpreted as, in effect, a No vote by the 60 per cent who abstained.

Nevertheless, there remain huge domestic issues in this context for neighbouring Greece, most of them the legacy of its long history.

If the Macedonian parliament accepts the referendum result and amends its constitution to remove what many Greeks see as irredentist claims on parts of historic Macedonia that remain in Greece, then the Greeks in their turn must accept that change. But Anel, the nationalist minor partner in the current Athens coalition, will oppose this, precipitating a collapse of government and a general election.

History, that cruel parent, raises its head with the question: do the Greeks accept “North Macedonia”, when the new country represents only 50 per cent of historic Macedonia, with 40 per cent still in northern Greece (including Thessaloniki, which has been part of Greece since only 1913), and another 10 per cent in Bulgaria.

It is more than a polite – or politic – bow to the lessons of history, since it also calls into question the bigger issue of what makes Greeks Greek. The agreement that will be voted on in the Skopje and Athens parliaments recognises the Macedonian language and ethnicity as givens, but this is disputed by many Greeks, who declare “Macedonia is Greek”.

The Greek insistence on the relevance of ancient history is even being described as “fake news”, as if it were a red herring to confuse the modern-day issues. But there are history lessons still waiting to be learned.

Almost 100 years ago, in 1921-22, with the encouragement of Britain and France, Greece invaded Turkey, in the belief that it had a right to do so under international treaties. This was to be the culmination of the Megali Idea or Great Concept, a process of enlargement of territory with the Trumpish slogan “Make Greece Great Again”.

It was a total disaster, as the Turkish army not only inflicted a humiliating defeat on the Greeks but also destroyed the largely Greek city of Smyrna (today’s Izmir) and caused the evacuation of more than one million ethnic Greeks from western Turkey (Anatolia).

But in addition to increasing Greece’s population 25 per cent, the Anatolian Catastrophe, as the events of 1922 have become known, split Greece down the middle because the national ideas of restoration and expansion had been shown to be false, bringing into question issues such as identity and purpose in a state not yet 100 years old.

In its wake came a series of domestic and international catastrophes, including a dictatorship in 1935, the second World War, the civil war of 1945-49 and the military junta of 1967-74. In a sense, these (with the obvious exception of the world war) can be traced back to the 1922 disaster. And the Megali Idea still hasn’t gone away.

Greece’s central position in the Balkans makes its relations with all its neighbours – Albania, Macedonia, Bulgaria, Turkey and Cyprus – susceptible to influence by the superpowers, especially when its porous and fragile borders are concerned. Greece and Macedonia, then as now, are the playthings of the superpowers manipulating relationships in the Balkans and the Levant.

Following the economic crisis since 2010, there is another enforced Greek migration, but this time it is outward: at least 500,000 young people have left Greece since 2008, due not only to economic deprivation and the near impossibility of finding worthwhile employment at a living wage, but also to the disillusion that successive governments seem to offer neither care nor concern for their welfare. This “brain drain” is depriving Greece of its future.

Greece urgently needs a new future, but at the same time it threatens to deny that privilege to its northern neighbour. The creation, at last, of a “Republic of North Macedonia”, makes it even clearer that the long-standing and profoundly disturbing question of Greek identity is once more a national and international breaking point.

The outcome of the votes in the Skopje and Athens parliaments affects not only the relationship between the two states but also whether or not Macedonia can proceed to membership of Nato and the EU, openly advocated by the US.

Russia, for its part, is allegedly making efforts to affect the outcome in order to keep the state within the Russian orbit of influence, so really nothing much has changed since Russia supported Greek independence, at the expense of the Ottomans, back in the 1820s.

We may, with the Bosnian conflict of the 1990s, have brought an end to military confrontations in the Balkans, but diplomacy is no respecter of borders and employs other means than the gun to achieve its aims. Whether this will lead to another “catastrophe” is anyone’s guess.