At least seven climbers killed after storm in Himalayas 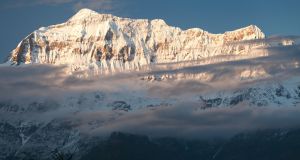 At least seven mountaineers were killed after their camp on a Himalayan peak in western Nepal was hit by a storm, police said on Saturday, in the country’s worst climbing disaster in two years.

Police official Bir Bahadur Budhamagar said villagers who reached the site at the base camp of Mount Gurja, a 7,913 metre-high peak (23,600ft), on Saturday spotted seven bodies in the mountain slopes. Nine climbers had been reported missing.

“The bodies have not been identified. Going by the colour of their skin four bodies must be of Korean climbers, while two are Nepalis,” Mr Budhamagar told Reuters from Myagdi district where the site is located.

“It is unclear whether the seventh body found was that of a Korean or Nepali,” Mr Budhamagar said.

The remote area is difficult to reach by foot, he said, and locals are still looking for two other climbers who are missing after the overnight storm.

“Rescuers will try to recover the bodies on Sunday,” Mr Niraula said.

Wangchu Sherpa, head of the Trekking Camp Nepal agency that provided local support to the South Korean team, said the camp had been destroyed, citing reports from the pilot of the rescue helicopter sent to look for the missing group on Saturday.

Nepal is home to eight of the world’s 14 highest mountains including Mount Everest, and the autumn climbing season is now at its peak. Income from foreign climbers is a major source of revenue for the cash-strapped nation. – Reuters