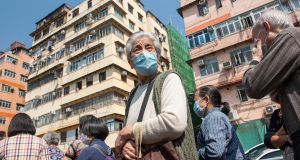 After more than a month confined to their homes, members of the Irish community under lockdown in Wuhan have been informed they will not be allowed to leave their compounds until at least March 10th, as the city battles to stem the spread of the coronavirus.

“Every day is like a week at this stage,” said Mike from Westport, who has been alone in his sixth-floor Wuhan apartment in Hubei province since January 22nd.

“Guys will appear with beards and long hair,” when the ordeal is finally over, he joked.

All across Hubei, the epicentre of the Covid-19 outbreak, increasingly stringent containment measures have been adopted as the epidemic’s death toll approaches 2,500 people and the number of confirmed cases nears 79,000.

While the novel coronavirus has spread to at least 32 countries and territories around the world, Hubei province accounts for 82 per cent of the total number of infections and 95 per cent of fatalities from the virus.

Provincial authorities circulated a notice over the weekend to instruct businesses to stay shut and people to remain in their homes until March 10th at the earliest, as the epidemic control efforts “enter a crucial stage… to win the people’s war”.

With the infection rate slowing in recent days across the province, and the number of recoveries topping 23,000, there had been hopes restrictions would be lifted sooner.

“I was disappointed about the date… I’m coping ok, bar every day seems very long,” said Mike, who asked to be identified by his first name. “It’s a prediction more than reality… But they are doing their best to contain the spread and if this is what we must do to protect other people, then so be it.”

In Hubei’s cities, as in much of urban China, many people live in high-rise, gated compounds. Hubei’s emergency regulations vary slightly from place to place, with residents allowed to leave their apartments and walk around the compounds in some areas, while in many others they are restricted to their homes and may not even step outside their door.

Michael McGreal is in Zaoyang city in northern Hubei, and he and his wife are among the many confined to their apartments.

“We have our temperature taken twice a day by the community management office. Our community gates are chained up. If we need food we can get the basics through [on online] shopping group in our community. The management will buy our shopping for us and deliver to our door,” he said.

“The only contact we currently have with the outside world is the community management who deliver food to our door in full hazmat gear.”

With the lockdown now in its fifth week, comfort items were running out, he said.

“The community management is not your personal shopper. So, you really can only get the basics for meal preparation. Beer or alcohol is definitely off the list,” he said.

In Mike’s compound the community management sends a text every day or two with a choice of some foodstuffs and necessities the residents can purchase.

“Like a bag of mixed vegetables. They choose the vegetables. Meat is now and again,” he said, adding that other options come through occasionally. “For example, you could have bought bread and jam yesterday.”

Other compounds appear to have more flexibility. Martin Gilsenan, from Oldcastle in Meath, said he was still able to get a wide range of items delivered to his gate.

He had been due to fly out of China on holidays on the day authorities sealed off Hubei province five weeks ago. His flight was cancelled and he has been under lockdown in Wuhan since.

A secondary-school teacher, he now conducts limited classes online. While it can be frustrating at home all day, “my school and the [Irish embassy in Beijing] have tried to keep me updated, so trying to stay positive,” he said.

As he contemplated at least another 17 days under confinement, Liam Griffey said enduring the monotony was the only real issue.

“Things are boring, I’d just like to go out somewhere, anywhere, as long as it’s not inside my community. We’ve been managing pretty well, we have enough food and we’ve been experimenting with cooking different types of food and dishes,” he said.