Iran’s bank sector targeted by new round of US sanctions 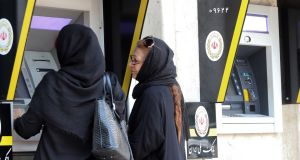 Women at an ATM in Tehran: Iran has struggled to purchase wheat, maize and soybeans to shore up reserves as coronavirus cuts agricultural output. Photograph: Atta Kenare

The Trump administration has imposed fresh sanctions on Iranian banks despite fears this will have catastrophic consequences for a population assailed by coronavirus and economic collapse.

This round aims at hobbling entire sectors of the economy at a time oil and precious metal exports, shipping, the armed forces, Iranian politicians, bankers and businessmen are already sanctioned.

Iranian foreign minister Mohamed Javad Zarif accused the US of depriving Iran of funds when the country is struggling with the coronavirus pandemic. He tweeted, “US regime wants to blow up our remaining channels to pay for food & medicine. Iranians WILL survive this latest of cruelties. Conspiring to starve a population is a crime against humanity.”

The measures target 18 banks in order to reduce Iranian exports that earn revenue to purchase humanitarian goods and threaten governments, banks, firms and institutions with secondary sanctions for providing Iran with food, medicine and medical devices which, in theory, are meant to be exempted.

Although the US treasury department argues exemptions protect humanitarian trade, in practice few have been ready to risk heavy fines or being excluded from the US market and financial system for trading with Iran.

“It’s like a punch in the face to the Europeans, who have gone out of their way to indicate to the Americans that they view [the secondary sanctions] as being extremely threatening to humanitarian assistance or humanitarian trade,” Elizabeth Rosenberg of the Centre for New American Security think tank told Reuters.

She said the Trump administration was seeking to pre-empt a Democratic victory in the November US election.

Democratic candidate Joe Biden has pledged to re-enter the 2015 agreement providing for sanctions relief in exchange for limiting Iran’s nuclear programme if Iran returns to full compliance with the deal.

US president Donald Trump withdrew from the deal in 2018 and has reimposed sanctions to pressure Iran to capitulate to a dozen US demands, including halting ballistic missile development and involvement in Iraqi, Syrian and Lebanese affairs

Sanctions have shrunk Iran’s economy, devalued its currency and impoverished millions of Iranians. Iran has responded by enriching uranium beyond limits allowed in the 2015 deal in an effort to compel Europe to break ranks with the US.

The hawkish Washington-based Foundation for the Defence of Democracies, as well as Israel and hardline US members of Congress, has backed the new round of sanctions. However Britain, France and Germany, the three European signatories of the nuclear accord, fear that the move will freeze Iran’s slender foreign assets, depriving Tehran of foreign currency to pay for essential supplies.

In 2019, Iran imported grain worth $3.5 billion and humanitarian goods valued at $1 billion, but in recent months Tehran has struggled to purchase wheat, maize and soybeans to shore up reserves as coronavirus has reduced agricultural output. Increasing shortages of insulin and cancer and heart medications have put at risk chronically ill Iranians.

In response to the Trump administration’s policy toward Iran, the International Court of Justice based at The Hague “ordered” the US to lift sanctions while expressing concern over the flow of humanitarian goods and the safety of airliners.