Covid-19: Cabinet agrees to keep schools closed for January in ‘most challenging phase of all’

Businesses could be closed until the end of March, Leo Varadkar suggests 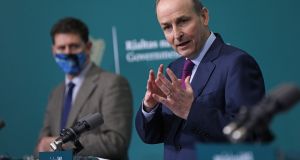 We “must dig deep within ourselves and face the coming month with steely determination and resolve”, Taoiseach Micheál Martin said. Photograph: Julian Behal

The Cabinet has agreed a range of further lockdown measures, including to keep schools closed but allow Leaving Cert students to attend three days per week, and to close non-essential construction projects.

The new measures will be in place until “at least the end of January” , Taoiseach Micheál Martin said.

Tánaiste Leo Varadkar suggested some restrictions could remain in place past February 1st. “If I was running a business now, I would be thinking there’s a probability I’ll be closed until the end of March,” he said.

The main measures are:

We “must dig deep within ourselves and face the coming month with steely determination and resolve”, Mr Martin said after the Cabinet meeting.

“We have risen to all the challenges that have presented themselves… we may now be entering the most challenging phase of all,” he said.

“The personal decisions we make... will directly affect how many more people get sick and how many people die”.

“We are in a battle against deadly and ever changing virus,” he said.

“ Unless you are involved in absolutely essential work you have no reason to be away from your home,” he said.

Ministers agreed that all Leaving Cert students will be permitted to attend school for three days a week from next week.

Schools will close for other children with learning moving online. However the Cabinet agreed to keep special schools and special classes in mainstream schools open for an estimated 15,000 pupils.

“While all the scientific and public health evidence shows [they] remain safe environments... the spread of the virus has got to the point where we have to stop as much mobility as we can,” Mr Martin said.

Pushed on a commitment that schools would reopen at the end of January, Minister for Education Norma Foley said that if society “hunkers down” for three weeks, “we are looking at the review [of the policy] at the end of January”. She said it was the “shared objective of all that we would achieve the traditional Leaving Certificate”. The three-day return to classes for Leaving Cert students would be done with “complete autonomy” by schools, which would be free to arrange and schedule it as they see fit, she added.

Minister for Culture Catherine Martin’s officials have engaged with RTÉ, TG4 and the Department of Education about restarting learning from home programmes immediately.

Cabinet agreed that essential workers will be allowed to form a bubble with another household in order to provide childcare if they do not have an existing arrangement, under plans discussed by the Cabinet.

Childcare services, including regulated childminders and other childcare arrangements, will be permitted to continue to provide services but only for vulnerable children and children of essential workers.

Non-essential construction work will have to finish at 6pm on Friday.

Work on social housing that is nearly completion will be permitted but only if it satisfies set criteria. Large infrastructure projects, understood to include the likes of the National Children’s Hospital and large school building projects, will continue, and emergency maintenance or repair work by plumbers, electricians and gas workers will be allowed continue.

Cabinet also agreed that a ban on travel from Britain and South Africa will be be lifted this coming Saturday. But passengers must provide a negative PCR test from the previous 72 hours and isolate for 14 days on arrival. This requirement will then be rolled out to all incoming passengers.

Minister for Transport Eamon Ryan said failure to provide a negaative test be subject to a fine of up to €2,500 or six months imprisonment.

The Cabinet also agreed that click and collect services for non-essential retail outlets will no longer be permitted with immediate effect in what will be a big blow for the sector. Click and deliver will continue to be permitted.

The meeting came against a backdrop of a significant rise in cases of the disease and with hospitals generally and intensive care units coming under pressure.

Mr Martin urged people to remember Mariter Tarugo, the Philippines native who worked at a healthcare assistant at St Vincent’s Hospital and died with Covid-19 on Christmas Eve.

Tánaiste Leo Vardkar said “This is bad, it’s getting worse, and we’re only beginning to see the impact on our hospitals”

“January is the month in which we all stay in,” he said.

Mr Martin said he was “very worried” about the spread of the UK variant of Covid in the State. “The variant is of huge concern to me, because of the potential of what it could do,” the Taoiseach said, adding that there would be extensive work to improve Ireland’s sequencing capacities and provide real time data on the spread of the variant in the weeks ahead.

Mr Martin said the vaccine taskforce was significantly more confident on the supply of Pfizer-BioNtech’s vaccine in the coming months, which would mean a smaller “buffer” would be held in reserve. However, he said there was no clear timeline for the delivery of more than 800,000 doses of the Moderna vaccine approved on Wednesday to the State.

“The numbers will be a help on top of Pfizer BioNtech,” he said, “but they’re not huge numbers, and we don’t have a clear timeline in terms of the release to us.” He said, however, that the “only issue holding back the vaccine programme will be the supply of vaccines into the country”.

Mr Varadkar said that by the end of February, he anticipated the State being able to vaccinate all residents and nursing home staff, as well as healthcare workers on the frontline. If more vaccines come on stream, he said the timeline could speed up.

“That’s with Pfizer and Moderna, if AstraZeneca comes in and becomes available we can step that up and step that up more,” he said.