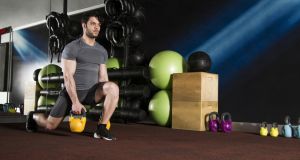 Becoming stronger is a worthwhile goal and need not be intimidating. Photograph: iStock

Disturbed by concerns about the pandemic and politics? Lifting weights might help, according to a timely study of anxiety and resistance training. The study, which involved healthy young adults, barbells and lunges, indicates that regular weight training substantially reduces anxiety, a finding with particular relevance during these unsettling, bumpy days.

We already have plenty of evidence that exercise helps stave off depression and other mental illnesses and that exercise can elevate feelings of happiness and contentment. But most past studies of exercise and moods have looked at the effects of aerobic exercise, such as running on a treadmill or riding a stationary bike.

Scientists only recently began to investigate whether and how weight training might also affect mental health. A 2018 review of studies concluded that adults who lift weights are less likely to develop depression than those who never lift. In another study, women with clinical anxiety disorders reported fewer symptoms after taking up either aerobic or weight training.

But many of these studies involved frequent and complicated sessions of resistance exercise performed under the eyes of researchers, which is not how most of us are likely to work out. They also often focused on somewhat narrow groups, such as men or women with a diagnosed mental health condition like depression or an anxiety disorder, limiting their applicability.

For the new study, which was published in Scientific Reports, researchers at the University of Limerick and other institutions decided to see if a simple version of weight training could have benefits for mood in people who already were in generally good mental health.

To find out, they recruited 28 physically healthy young men and women and tested their moods, with a particular emphasis on whether the volunteers felt anxious. All the participants scored in a healthy range on detailed anxiety questionnaires.

The scientists then divided these well-adjusted volunteers into two groups. Half were asked to continue with their normal lives as a control group. The others began to weight train, a practice with which few were familiar.

The scientists had devised a helpfully simple resistance training routine for them, based around health guidelines from the World Health Organisation and the American College of Sports Medicine. Both those organisations recommend muscle strengthening at least twice a week and that’s what the volunteers began doing. After initial instruction from the researchers, the volunteers took up a basic program of lunges, lifts, squats and crunches, sometimes using dumbbells and other equipment.

Their training continued for eight weeks. Throughout, both groups periodically repeated the tests of their anxiety levels, including at the end of the full program. (After the study ended, the control group was given the option of starting the weight training routine.)

As expected, the control group, for the most part, retained their original low levels of anxiety. They still felt about as tranquil as eight weeks before.

But the weight trainers scored about 20 per cent better on the tests of anxiety. They had started with low levels of anxiety to begin with but felt even less anxious now.

This effect was “larger than anticipated,” says Brett Gordon, a postdoctoral scholar at the Penn State Cancer Institute at Penn State College of Medicine, who was a co-author of the study with Matthew Herring, Cillian McDowell and Mark Lyons. The benefits for mental health were greater than those often seen in studies of aerobic exercise and anxiety. But Gordon cautions that such comparisons are limited, since the various experiments use different amounts of exercise and measures of moods.

The new study also did not delve into how weight training can affect anxiety. But Gordon and his colleagues suspect increased physical and psychological potency figure in. The lifters became stronger over time and able to lift heavier weights. “Feelings of mastery may have occurred” then, he says, leaving people feeling generally more capable of coping. Molecular changes in the lifters’ muscles and brain likely also occurred and contributed to improvements in their moods, he says, noting that future studies may help to detail some of those changes.

Or course, this experiment featured only healthy young people performing one version of training, so the findings cannot tell us if lifting likewise eases anxiety in older people. Nor can it tell us which regimen might be enough, too much or just the right amount to bolster mental health.

Finally, it also does not prove that heading to the gym today can acutely soothe any mental turmoil we may be feeling, since the improvements in the study showed up after weeks of training.

But if you are feeling tense and uptight, as so many of us are these days, becoming stronger is probably a worthwhile goal and need not be intimidating, Gordon says. “There are numerous ways to strength train with little to no equipment,” he says. “Try common body weight exercises, such as push-ups, sit-ups or squats, or use household items as weights.” – New York Times