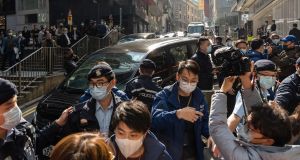 Members of the media and police officers surround a vehicle carrying John Clancey after his arrest on Wednesday during an apparent crackdown on pro-democracy figures. Photograph: Chan Long Hei/Bloomberg.

Hong Kong police have arrested 53 pro-democracy politicians in one of the biggest purges of the city’s opposition since Beijing imposed a tough new national security law on the city last year.

Among those detained were moderate former democratic lawmakers and human rights lawyer John Clancey – a US citizen who is believed to be one of the first expatriates arrested under the law.

Police also for the first time accused the city’s most prominent pro-democracy activist, Joshua Wong, of violating the national security law. Crimes under the law are punishable with up to life imprisonment.

The arrests targeted activists and politicians who were involved in a primary run-off last year to determine which opposition candidates would run in elections for the Legislative Council, Hong Kong’s de facto parliament. The city’s government subsequently postponed the election, which was scheduled for last September, citing the coronavirus pandemic.

The sweeping action on Wednesday marks a severe escalation of a crackdown following the imposition of the national security law in June, which critics say threatens freedoms promised to the semi-autonomous territory under its handover to China by the UK in 1997.

On Wednesday, police searched the home of Mr Wong, who is in prison for other offences, and accused him of contravening the security law, according to the activist’s official social media pages.

The pro-democracy lawmakers had resigned from the Legislative Council last year as part of a mass boycott of the body by opposition politicians after the government disqualified four of their colleagues. The resignations left the de facto rubber-stamp parliament effectively devoid of opposition.

Hong Kong’s opposition Democratic Party said police had linked the arrests to the primary run-offs and accused its members of violating the national security law, according to the party’s Facebook page.

“The wave of arrests is part of an ongoing pattern of squeezing out the last remaining spaces for action by the democratic opposition in Hong Kong, and at times taking advantage of moments when leaders and citizens in other parts of the world are distracted by domestic news cycles,” said Jeffrey Wasserstrom, a China historian at the University of California.

The round-up also followed fears that political pressure from Beijing is threatening the independence of Hong Kong’s globally respected judicial system, considered essential to its role as an international financial hub.

On Monday, Geoffrey Ma, the outgoing chief justice, indirectly raised concerns about growing calls from pro-China groups in the city for changes to the legal system.

Pro-Beijing groups have challenged court decisions in which defendants facing charges related to the 2019 protests were acquitted or handed what government supporters considered lenient sentences.

“If there is any reform required, give us the details and we will consider it,” Justice Ma said on Wednesday ahead of his retirement this week. “But it’s not particularly satisfactory [if] there is a call for reform simply on the basis of a result one doesn’t like.”

Justice Ma insisted, however, that he had not faced pressure from Beijing in deciding cases. “Do I have any direct interference with what I do or what the courts do from the government or from Beijing? The answer is no,” he said.

Antony Blinken, US president-elect Joe Biden’s nominee for US secretary of state, said the incoming administration would support “the people of Hong Kong”.

“The sweeping arrests of pro-democracy demonstrators are an assault on those bravely advocating for universal rights,” Mr Blinken wrote on Twitter. “The Biden-Harris administration will stand with the people of Hong Kong and against Beijing’s crackdown on democracy.”

Chris Patten, the last British governor of Hong Kong, said that in light of the latest crackdown it would be “a massive strategic blunder” for the EU to sign an investment deal with China. – Copyright The Financial Times Limited 2021