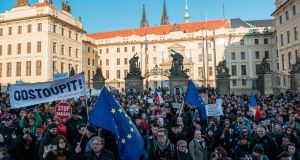 Demonstrators call for the resignation of Czech prime minister Andrej Babis, on Saturday, the day marking the 29th anniversary of the Velvet Revolution, in front of Prague Castle. Photograph: Michal Cizek/AFP/Getty Images

Thousands of Czechs have protested against their prime minister, Andrej Babis, and urged him to resign over a string of scandals, including claims from his son that he was forced to leave the country to avoid questioning in a fraud case.

About 20,000 people rallied in Prague against the tycoon turned politician on Saturday, amid nationwide events to mark the anniversary of the 1989 Velvet Revolution that ended communist rule in Czechoslovakia.

Mr Babis took power almost a year ago despite facing prosecution over alleged fraud involving some €2 million in EU funds, and controversy over accusations that he was an informer for tshe communist-era StB secret police.

His government was plunged back into crisis last week, when his son Andrej Babis jnr (35) told Czech media that his father threatened to have him admitted to a psychiatric hospital unless he agreed to take an “extended holiday” in Crimea, where he claimed to have been detained against his will by two Russians.

He told the Seznam Zpravy website that he was sent away when police wanted to talk to him about the firm involved in the alleged fraud.

Mr Babis insists the kidnapping story is nonsense and that Andrej jnr is mentally ill, and he accuses the Czech media and opposition parties of cynically using his son’s claims to put pressure on his administrations and prosecutors.

The billionaire premier laid flowers at a Prague memorial to victims of communism in the early hours of Saturday, and said he would then fly to see his son in Switzerland, where he lives with his mother.

Later that day, protesters reportedly threw Mr Babis’ flowers in a rubbish bin, along with those offered by Czech president Milos Zeman – a populist, anti-immigration and pro-Russian Eurosceptic – and by far-right party leader Tomio Okamura.

“It is unacceptable that someone under investigation and an StB collaborator is prime minister,” said protest organiser Mikulas Minar.

“We won’t allow that, it’s not normal, and we want Andrej Babis to leave his post,” he added, as crowds chanted “Resign” and waved placards reading “Stop Babis!”

The opposition-controlled upper house of the Czech parliament has called on Mr Babis to step down until the fraud investigation is over, and the lower house is expected to hold a vote of confidence in his government this week.

Mr Babis has vowed to “never resign” over what he called false allegations, and Mr Zeman said that if the premier lost a confidence vote, he would nonetheless nominate him again to form a new government.

Jan Hamacek, the leader of Social Democrats who are the main allies of Mr Babis’ Ano party, said the premier’s personal travails were “extremely burdensome” for the government, and acknowledged that his party had not decided which way to vote on the confidence motion.