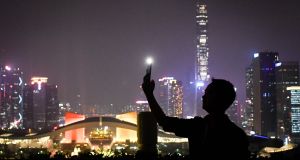 Shenzhen, , just across the border from Hong Kong, has evolved from a low-end manufacturing hub to a southern Chinese Silicon Valley. Photograph: Wang Zhao/AFP/Getty Images

In the tech incubators and skyscrapers of Shenzhen, which has evolved from a low-end manufacturing hub to a southern Chinese Silicon Valley and a poster child for Xi Jinping’s China Dream, people are recalibrating their view of Donald Trump.

Many entrepreneurs here admired Trump’s capitalist chops and welcomed his election as US president but the view in Shenzhen, just across the border from Hong Kong, has changed since he started a trade war that is threatening to slow down the Chinese economy and hit the city’s exports.

The trade war has drawn attention to the globe’s most important bilateral relationship, as a resurgent China flexes its international diplomatic muscles and sees the US as impeding its rise. The battle is to see who will control the new technologies that will dictate the global balance of power.

When Danny Hu, director of international business at the medical technology company Creative Medical, heard the US was about to implement tariffs on Chinese goods, he reached out to his American customers.

“The US accounts for 5 per cent of our international market share, so it’s not a big proportion of our sales, but because of the trade war, our customers have to pay higher duty,” Hu said in an interview at the firm’s headquarters.

Trump accuses China of playing unfair on market access, of stealing intellectual property rights and of industrial policies that give unfair advantage to Chinese firms. In July, the US imposed tariffs on $250 billion (€220 billion) worth of Chinese goods, and $200 billion (€176 billion) of those products will rise to 25 per cent from 10 per cent come January 1st.

China retaliated with its own levies on $110 billion (€97 billion) of US products and the conflict will escalate if the US moves ahead with its planned increase at the start of 2019.

Hu encouraged his US customers to get orders in ahead of the deadline. Creative Medical, which exports to more than 100 countries including Ireland, is moving to new, bigger premises, partially because the firm has grown strongly but also because property prices have gone through the roof – its 2,000sq/m floor space is worth about 50 million yuan (€6.3 million).

“China is like a big ship sailing in the sea. The trade war is like a wave, it affects how we sail but does not change our direction or stop us from sailing. It won’t stop our growth,” says Hu.

Economic data has yet to register a trade war-related downturn, but China is the world’s biggest exporter, and 18 per cent of its exports go to the US. Stopgap measures won’t work forever, and the focus has shifted to increasing sales in China and looking for alternative markets.

Last month, President Xi Jinping visited nearby Zhuhai on a tour of Guangdong to open the world’s longest sea bridge. He spoke of how the project would inspire confidence and rejuvenation, and create “fulfilled dreams” and “connected hearts” – a rallying call to Guangdong, the engine of Chinese economic growth, to stand firm during the trade war.

All of this is about much more than trade, however. In a speech in October, US vice-president Mike Pence accused China of trying to sway the US midterm elections for its own political ends.

There are military tensions, ratcheted up after a Chinese naval vessel came within 40m of the bow of the USS Decatur as it carried out a “freedom of navigation” operation in the South China Sea, most of which is claimed by China.

A perennial bugbear in relations is self-ruled Taiwan, an island Beijing sees as an inviolable part of its territory and has threatened to take back by force if necessary.

So it showed a certain insensitivity when, shortly after his election, Trump called Taiwan’s president Tsai Ing-wen. Beijing frequently complains about the sale of US military equipment to Taiwan and was furious when Pence praised Taiwan’s democracy as a model for China.

“Among experts who are familiar with the history of US-China relations, the importance of Taiwan to Beijing is not underestimated. But there are probably few people who know or care about that history,” says Bonnie S Glaser, a senior adviser for Asia and director of the China Power Project at Centre for Strategic and International Studies.

“My sense is that many Chinese experts are misreading Trump’s policy and intentions toward Taiwan . . . I frankly don’t see any evidence yet that the US is backing Taiwan independence or moving away from its one China policy,” says Glaser.

Steve Tsang, director of the Soas China Institute in London, describes the US-China relationship as undergoing “a structural change”.

“The USA is in the process of changing how it sees China and how it would like to engage with China. Beijing is slow in recognising this change as going beyond the Trump administration. The new relationship will be marked by much greater tension, more competition and less co-operation,” says Tsang.

Paul Haenle, a former White House National Security Council official who now directs the Carnegie-Tsinghua Centre for Global Policy in Beijing, doesn’t think China and the US are in a new cold war, but he does think relations are taking on “a degree of zero-sum dynamics”.

He believes China is banking on a meeting between Xi and Trump on the sidelines of the G20 meeting of world leaders in Argentina this month to get relations back on a more stable and positive trajectory.

“However, I worry that the Chinese might be setting expectations too high as well as underestimating the will among some policymakers in Washington to maintain a tougher posture with China until there is evidence that Beijing is willing to take steps to address areas of US and international concern,” says Haenle.

He worries that Trump’s bilateral approach may “allow the Chinese side to cling to a narrative that US pressure is all about US attempts to block China’s rise and contain China”.

Could China and the US actually go to war? Some analysts worry the US and China have entered a Thucydides trap, when a rising power causes fear in an established power which then escalates into military conflict.

Fu Ying, a professor of the Tsinghua University and former vice-minister for foreign affairs, wrote a cautionary article in October urging the US to think whether forcing relations to deteriorate was in America’s best interests. “Although events of late have increased apprehensiveness, we have not given up the hope of returning to a place of progress and stability, and we are willing to work toward this goal. Just because the Thucydides Trap is set doesn’t mean we have to walk into it,” she said.

Certainly the view of Trump in China has changed since the days when toilets with his name in Chinese were popular online purchases, and Beijing is far more wary in dealing with him now than it was in the early days of his administration.

Given Trump’s fondness for creating problems in order to be seen to solve them, it is possible that the trade conflict could be resolved soon, but lasting damage has been done to US-China relations.

Danny Hu remembers how he learned business nous from watching The Apprentice, the reality television show in which Trump played the central role, while at university.

“But it’s a different thing as president. Donald Trump runs the USA like his own company, he’s trying every means to get a profit and increase his income. Although most times this is built on the pain of other countries.”

Tomorrow: Clifford Coonan reports from Lanzhou, where hundreds of mountains are being flattened to create a new city that will form a key staging post on Xi Jinping’s plans for a new Silk Road, the Belt and Road Initiative

1 Explainer: Did the Taoiseach ignore public health rules by going on a picnic?
2 Coronavirus: Need to move away from the ‘language of blame’ - Holohan says
3 Dig for remains of Red Hugh O’Donnell finds skull and coffins
4 University of Limerick head resigns over personal Covid-19 health concerns
5 Mother may seek orders ending life of daughter in vegetative state
Real news has value SUBSCRIBE