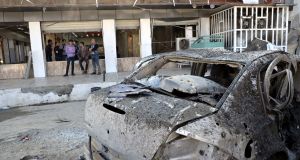 IS militants have switched from controlling territory to insurgency tactics such as bombings and attacks on security forces since their defeat. File photograph: EPA

A car bomb blast killed at least five people and wounded 16 others in the Iraqi city of Tikrit on Sunday, police and medical sources said.

The blast set nearly a dozen vehicles on fire, said police. Security forces have closed most of the city streets and deployed in case of further incidents.

There was no immediate claim of responsibility for the explosion. Such attacks have been rare in Tikrit, about 100 miles north of Baghdad, since Islamic State were defeated in Iraq in 2017.

IS militants have switched from controlling territory to insurgency tactics such as bombings and attacks on security forces since their defeat.

Analysts and security sources warn these attacks are likely to increase in traditional Sunni militant strongholds in the north and west of the country, although security in Baghdad has improved.

Iraq’s government said this week that about 2,000 Iraqi IS fighters based across the border in eastern Syria were seeking a return to Iraq and that security forces were preparing to prevent militant incursions. – Reuters