Brexit explained: What the hell is going on?

Simon Carswell on backstops, resignations, concessions, divorce deals and where it all goes next

British prime minister Theresa May says that she believes the current draft Brexit agreement is the best that could be negotiated. Video: Reuters 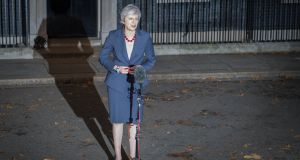 What happened with Brexit on Thursday?

Britain’s Brexit secretary Dominic Raab resigned in protest at British prime minister Theresa May’s deal for leaving the European Union. “I regret to say that, following the Cabinet meeting yesterday on the Brexit deal, I must resign,” he said in a statement on Twitter. Mr Raab said Ms May’s plan threatened the integrity of the United Kingdom.

Why is Theresa May losing some members of her cabinet over the Brexit deal?

The resignations are happening over fears that the draft agreement will damage the integrity of the United Kingdom by potentially putting in customs and regulatory checks between Northern Ireland and the rest of the UK and that the EU could ultimately have a veto over when the guarantee ensuring no hard Irish border will expire, possibly reducing the UK’s independence to have a say on its own trade policies after Brexit.

So what are they are particularly concerned about?

UK Brexit secretary Dominic Raab said that no democratic nation could agree to be bound by “an extensive regime, imposed externally without any democratic control over the laws to be applied, nor the ability to decide to exit the arrangement.” Esther McVey, the Conservative MP who stood down as work and pensions secretary, says that the Brexit proposals “will trap us in a customs union” and “bind the hands” of the UK government and future governments in pursuing genuine free trade policies.

Are they right to be concerned?

The draft agreement does indeed set up a joint committee made up of EU and UK representatives - co-chaired by both the EU and the UK - that will oversee regulatory and customs checks between Northern Ireland and the UK and the level playing field rules to ensure that the UK does not have an unfair advantage. It must be said, however, that all this only comes into place under the so-called backstop, if the EU and UK cannot agree a trade deal and better solution for the Border that avoids the obligation to do all this.

What happened with Brexit on Wednesday?

Mrs May announced, after a marathon meeting, that her cabinet had approved the proposed Brexit divorce deal agreed by EU and UK officials earlier this week. Shortly after her announcement, the European Commission published the 585-page agreement including “a protocol” covering the so-called backstop that would avoid a hard border on the island of Ireland after the UK leaves the EU.

It is the insurance policy within the divorce deal that maintains the open Irish border in the event of the EU and UK failing to find an alternative, better solution in any future relationship they agree on.

But wasn’t this backstop agreed by the EU and UK earlier this year?

No, both sides agreed there should be a backstop in the withdrawal agreement but they had until this week failed to agree the detail and text of a backstop that would make it legally operable - in other words, workable.

So what’s different about the ‘no hard border’ guarantee in this agreement?

There are a few things but the biggest difference is that this backstop will involve, in the absence of a future deal, the whole of the UK staying aligned with the EU customs union instead of just a specific rule applying to Northern Ireland as was originally proposed when the EU first suggested a backstop earlier this year.

Is it a big concession to the UK?

It is in a way. To keep other EU member states happy with this arrangement, Brussels and London have agreed a set of measures to ensure there is a level playing field between the EU and the UK. This is to ensure that, should the backstop come into effect, the UK would have no competitive advantages over the EU.

Will all this be enough to avoid checks along the Irish Border?

No, not on its own. The draft agreement says, under the backstop, the EU’s custom code will continue to apply to Northern Ireland, meaning that it can continue to export and sell products within the EU. This will ensure Northern Irish businesses will face no restrictions on their products when selling into the EU single market. The UK has also agreed, under the terms of this new backstop, that Northern Ireland will remain aligned with a limited set of rules relating to the EU’s single market, specifically legislation covering goods, sanitary rules for veterinary controls, rules on agricultural products, Vat, excise on goods and state aid rules. All this would ensure that there would be no new border checks on the island of Ireland.

Wasn’t the DUP worried about a border emerging in the Irish Sea?

The draft agreement aims to address this too. It says there is nothing in it that shall prevent the UK from “ensuring unfettered market access for goods moving from Northern Ireland to the rest of the UK’s internal market”. The deal aims to make goods moving to Northern Ireland from the rest of the UK as frictionless as possible and to minimise checks. A joint committee made up of EU and UK representatives will keep this “under constant review” and adopt appropriate recommendations to avoid “to the extent possible” controls at the ports and airports of Northern Ireland concerning any goods coming in from the UK.

Should the Irish Government be happy about the deal?

Yes, it achieves what the Government had hoped it would: it is legally operable, it is not time-limited and has no end-date. Crucially, the backstop in this agreement cannot be unilaterally ended by the UK, which is what the British Brexit secretary Dominic Raab had sought, drawing strong objections from Dublin.

How will the backstop end then?

If, after the transition period, either the EU or UK believes the backstop, in whole or part, is no longer necessary, they will notify the other side. The joint committee will consider the request and may seek the opinion of institutions created under the 1998 Belfast Agreement.

So when will the backstop kick in?

If the EU and UK fail to agree a deal on their future relationship by December 31st, 2020 - the current scheduled end of the standstill transition period when no rules change - the backstop will apply until a subsequent agreement is in place. Alternatively, the UK can, before July 1st, 2020, request an extension to the transition period. This must come from the aforementioned joint committee.

Once the withdrawal agreement is endorsed by the EU leaders at the European council, it must be ratified by the EU and UK parliaments. Given the opposition of politicians in Britain and Northern Ireland, Westminster will be the next arena for battle over this divorce deal.