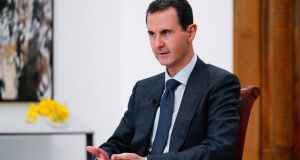 Syrian president Bashar Assad: likely to be particularly concerned about Sweida, a byword for kidnappings, murders and robberies. Photograph: Sana via AP

The Syrian pound has hit a record low on the black market ahead of fresh United States sanctions targeting anyone engaging in major dealings with Syria’s government. The pound’s value hovers between 3,000-5,000 to the dollar rather than the official rate of 700.

Although markets are stocked with produce, the World Food Programme reports that 7.9 million Syrians cannot meet their food needs and another 1.9 million face food insecurity.

Demonstrations against high prices and low wages erupted in southwestern Sweida, heartland of the Druze minority, and spread to the neighbouring province of Deraa, cradle of the 2011 unrest which morphed into nine years of civil and proxy warfare.

When Druze protesters revived the Arab Spring slogan – “The people want the fall of the regime” – government loyalists took to the streets.

Assad is likely to be particularly concerned about Sweida. The Druze, a breakaway sect of Islam, led the 1925-1927 revolt against the French colonial regime. During the ongoing conflict, the Druze and other minority communities have supported the government.

Like the Kurds in the north, the Druze have run their own affairs and formed their own protection units rather than face army conscription. Sweida has, however, become a byword for kidnappings, murders and robberies as well as attacks by Islamic State and other jihadis.

Residents of areas under Kurdish and jihadi control are also suffering from the currency’s collapse and soaring prices. Inhabitants of the northeastern US-backed Kurdish-dominated region, which makes up 25 per cent of Syria, complain that they can no longer afford food or fuel.

In northwestern Idlib province, which is controlled by al-Qaeda-linked jihadis, the Turkish pound has flowed across the Turkish-Syrian border and partially replaced Syria’s currency.

Meanwhile, clashes have continued in and around Idib’s deconfliction zone. Ankara has complained that radical jihadis have violated the Turkish-Russian ceasefire by attacking and seizing villages outside the zone held by the Syrian army. Russian war planes have responded by bombing and shelling the jihadis, enabling the army to retake lost territory.

On the economic front, Assad had hoped to provide some relief to the populace by seizing for non-payment of taxes millions of dollars for the state coffers from his cousin Rami Makhlouf, the country’s richest man, and others who made fortunes during the war.

This effort, however, has not countered sanctions and the negative impact of the financial crisis in Lebanon, to which Syria’s economy is intimately linked.