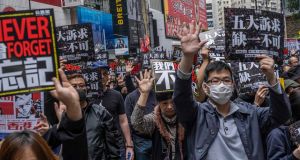 Twitter has purged 174,000 state-linked accounts it says were run by China to spread misinformation on the social network about the pro-democracy protests in Hong Kong and Beijing’s response to the coronavirus outbreak.

The company said it removed a “core network” of 23,750 accounts plus 150,000 “amplifier” accounts designed to boost the content.

“This entire network was involved in a range of manipulative and co-ordinated activities,” Twitter said in a statement.

“They were tweeting predominantly in Chinese languages and spreading geopolitical narratives favourable to the Communist Party of China, while continuing to push deceptive narratives about the political dynamics in Hong Kong.”

Twitter, along with Facebook, Google, WhatsApp, YouTube and a host of other platforms, are blocked in China but state media and China’s diplomats have engaged widely with them in recent years in an effort to push Beijing’s narrative on the global stage.

Twitter also announced that it had disclosed 7,340 “state-linked information operations” from Turkey and 1,152 from Russia. In revealing the fake accounts, the company said its goal was to serve the public conversation, advance public understanding of critical topics and “remove bad faith actors”.

Twitter and other social media companies were criticised for not controlling the flow of propaganda from state players such as Russia in the run-up to the 2016 US elections.

The New York Times published last week an analysis of 4,600 Twitter accounts that appeared to have the sole purpose of amplifying the official Chinese commentary coming from diplomatic and state media accounts.

In response to the tech giant’s move, Chinese foreign ministry spokeswoman Hua Chunying said on Friday that China was the biggest victim of disinformation and Twitter should focus on protecting China from smear campaigns.

“If Twitter wants to make a difference, they should instead shut down those accounts that are organised and co-ordinated to attack and discredit China,” she told a news briefing in Beijing.

Twitter’s revelations come as video-calling service Zoom admitted it had acceded to a demand from the Chinese government to shut down accounts of US and Hong Kong activists who gathered on the site to commemorate the 1989 Tiananmen crackdown.

Zoom said the Chinese government had notified it about four Tiananmen commemoration meetings that were publicised on social media, saying the activities were illegal in China and demanding they shut them down.

The company said it did not currently have the ability to remove specific participants from a meeting or block participants from a certain country from joining a meeting. To comply with China’s demands, Zoom employees based in the US monitored the metadata for the calls and when they discovered that people from mainland China were joining three of the meetings they shut them down and suspended the host accounts.

In a statement released on Friday, Zoom said it “fell short” in its actions and had since reinstated the accounts of the users based in the US and Hong Kong. But the statement added it would be developing technology over the coming days to enable them to remove or block individual participants based on geography so it could accommodate demands from China and other countries.

“This will enable us to comply with requests from local authorities when they determine activity on our platform is illegal,” it said.