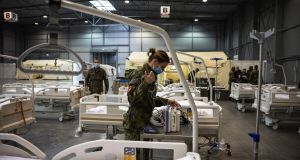 A soldier installs machines in a facility for Covid-19 patients in the Letnany Exhibition hall, Prague. Photograph: Milan Jaros/Bloomberg

The Czech Republic has gone into a second lockdown to avert the “collapse” of its healthcare system, as governments across central and eastern Europe tighten restrictions in response to a soaring increase in new coronavirus cases.

Non-essential shops and services in the Czech Republic shut down on Thursday and people were urged to stay at home as much as possible, as officials announced a record daily rise of 14,968 new Covid-19 cases.

The country of 10.7 million is now dealing with 124,040 confirmed active cases of Covid-19 – six times more than a month ago – prompting Czech prime minister Andrej Babis to scrap a pledge that there would be no return to lockdown.

“The increase in cases is huge. Unfortunately, the measures that we put in place over the past weeks have not succeeded in flattening the curve, and it looks as though they are not working. We are also experiencing a massive increase in patients who require hospitalisation,” Radio Prague International quoted him as saying.

“I apologise to the public and to businesses for the measures we have had to adopt. I said it would not happen, because I did not believe it could happen,” he added.

The US military is dispatching 28 doctors from the national guard to assist their Czech colleagues, and Mr Babis has spoken to officials in Germany, Poland and Hungary about the possibility of sending Czech patients there if necessary.

It is a brutal turnaround for the Czech Republic, which was praised for being quick to introduce mandatory mask wearing and other tight restrictions in March.

Over the summer, Mr Babis declared his country to be “best in Covid” and told the World Health Organisation to “keep quiet” when it queried the country’s testing and tracing regimes.

As coronavirus has roared back, the billionaire businessman has faced growing criticism for failing to reimpose strict controls in a bid to keep the Czech economy moving.

“We certainly made mistakes when we thought at the end of May, when we finished the reopening, that we had managed it,” he admitted when announcing the new lockdown.

Neighbouring Slovakia plans to respond to its own record rise in coronavirus cases by testing all residents over the age of 10 in the coming weeks, despite doubts over the accuracy of antigen tests. Thousands of Slovak soldiers will help implement the scheme.

“If we manage to pull this off, we can set an example for the entire world,” said Igor Matovic, prime minister of the country of 5.4 million.

Poland reported 12,107 new infections on Thursday, another national daily record, as the government prepared to announce a raft of tighter restrictions.

Several other states around the region also recorded their highest climbs in cases on Thursday, including Ukraine, Romania, Hungary, Croatia and Slovenia.