President hits out at moderator ahead of debate in Nashville 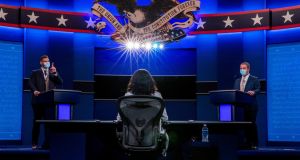 Preparations continue on stage inside the Curb Event Center ahead of the presidential debate between US president Donald Trump and Democratic nominee Joe Biden at Belmont University in Nashville, Tennessee. Photograph: Shawn Thew/EPA

US president Donald Trump and his Democratic opponent Joe Biden will face off in their second and final debate on Thursday night, with less than two weeks left in the election campaign.

The two candidates will appear on stage in Nashville, Tennessee, with moderator Kristen Welker from MSNBC questioning them on their policy positions as they seek to win the White House on November 3rd.

Thursday night’s event takes place after the scheduled debate in Miami a week ago was cancelled, following Mr Trump’s refusal to take part in a virtual event after his diagnosis with coronavirus. Instead the two candidates appeared in competing televised “townhall” events, with more Americans tuning in to watch former vice-president Mr Biden than Mr Trump.

In a departure from the first presidential debate, the moderator will be permitted to mute the microphone of the candidates when they are delivering their initial response to each of six topics up for discussion.

This follows a raucous and chaotic first encounter between Mr Trump and Mr Biden on September 29th, which saw the US president continually interrupt his opponent, and Mr Biden telling the president to “shut up” at one point.

“It is the hope of the commission that the candidates will be respectful of each other’s time, which will advance civil discourse for the benefit of the viewing public,” the Commission on Presidential Debates said in a statement.

The topics due to be covered include the coronavirus, race in America, national security and leadership.

Mr Trump hit out at Ms Welker ahead of the debate. “She’s always been terrible & unfair, just like most of the fake news reporters, but I’ll still play the game,” Mr Trump said in a tweet. Speaking on Fox News, he claimed the moderator’s parents were Democrats.

The president has been escalating his attacks on Mr Biden in recent campaign rallies, describing him as a “criminal” and calling on attorney general William Barr to investigate him.

Much of his focus has been on last week’s New York Post story claiming that Mr Biden’s son Hunter tried to arrange a meeting between his father and a Ukrainian official while the younger Biden was serving on the board of Ukrainian energy company Burisma. Joe Biden was vice-president at the time.

The report claimed that emails were found on a laptop that Hunter Biden left in a computer repair shop in Delaware which he never collected and the owner then alerted the FBI to the contents he had found.

However, questions have been raised about the provenance of the story, which was given to the Rupert-Murdoch owned New York tabloid by Mr Trump’s lawyer Rudy Giuliani.

There are reports that Fox News and other media organisations chose not to run the story, because of concerns about sourcing. A group of  more than 50 former intelligence officials signed a letter stating the information in the story bore the hallmarks of a Russian disinformation campaign.

Mr Giuliani was facing questions on Wednesday about his appearance in a compromising scene in the new Borat film, which shows the former New York mayor in a hotel room with an actor posing as the daughter of the fictional Kazakh journalist played by director Sacha Baron Cohen.

As the two campaign teams prepared to descend on Nashville on Thursday, Mr Trump’s daughter Ivanka is due to hold a fundraiser with her father in Tennessee ahead of the debate, amid signs that Mr Trump is lagging Mr Biden in terms of fundraising.

The New York Times reported that the Trump campaign had $63 million in the bank at the end of September, compared to Mr Biden who reported having $177 million in hand heading into the final stretch of the campaign.