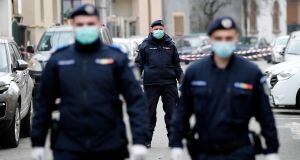 Romania’s government has gone into self-isolation and several central European states are imposing major travel restrictions to fight coronavirus, which Hungary’s anti-immigration leader says is being spread by “foreigners”.

Ludovic Orban, Romania’s acting prime minister, said his cabinet and some other members of his National Liberal Party would enter voluntary quarantine on Friday after senator Vergil Chitac was found to have contracted the virus, also known as Covid-19.

The Czech Republic announced that from Monday its citizens would be banned from travelling abroad and foreigners barred from entering the country, with the only exceptions being people living in border areas, cargo delivery drivers and non-Czechs with residence permits.

The Czech government imposed the measures under a 30-day state of emergency, which also obliges pubs and restaurants to close no later than 8pm – potentially dealing a heavy blow to the famous Czech beer industry and Prague’s huge tourist trade.

Neighbouring Slovakia is also halting almost all travel to and from the country, after shutting down its international airports on Friday and halting cross-border train and bus travel. As in much of the region, Slovakia is also closing schools from Monday.

Ukraine, which recorded its first fatality from coronavirus on Friday, announced that from Sunday foreigners would be denied entry to the country under all but exceptional circumstances. The ban will be in place for an initial period of two weeks.

Bulgaria’s parliament voted on Friday to impose a state of emergency, after prime minister Boiko Borisov called for tough action against people who break quarantine and proposed that “discos, bars and nightclubs – where people sweat and hug – should be closed immediately”.

Serbian president Aleksandar Vucic said he would meet other party leaders next week to discuss the possible postponement of parliamentary elections scheduled for April 26th. In North Macedonia, meanwhile, party chiefs said they had agreed not to delay national elections on April 12th.

Several of Hungary’s first coronavirus cases involved students from Iran, and Hungarian prime minister Viktor Orban said on Friday that his government was now closing universities rather than schools because “there are lots of foreigners there”.

“Our experience is that primarily foreigners brought in the disease, and that it is spreading among foreigners,” said the fiercely anti-immigration leader.

“We are fighting a war on two fronts: one front is migration and the other is the coronavirus, and there is a logical connection between the two as both are spread by movement.”