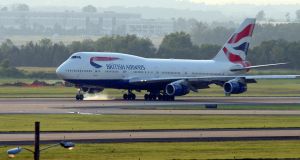 BA boss Alex Cruz says the airline would have to react fast in response to the worsening situation. Photograph: AFP via Getty

The chief executive of British Airways has warned the airline industry is facing a “crisis of global proportions like no other”, adding that the carrier will have to make job cuts, suspend routes and ground aircraft because of the coronavirus pandemic.

In an internal message to staff, Alex Cruz said: “Some of us have worked in aviation through the global financial crisis, the Sars outbreak and 9/11. What is happening right now as a result of Covid-19 is more serious than any of these events. It is a crisis of global proportions like no other we have known.”

BA has the same owner, IAG, as Aer Lingus. A spokeswoman for the Irish airline had no comment to make on the matter on Friday afternoon.

In the message, Mr Cruz said that, while BA was more financially resilient than ever before and had a robust balance sheet, it was “under immense pressure”.

He said BA would have to react fast in response to the worsening situation.

“As a result, we are suspending routes and will be parking aircraft in a way that we have never had to do before. Please do not underestimate the seriousness of this for our company.”

In the message titled “The Survival of British Airways”, Mr Cruz added that the carrier would have to make job cuts – “perhaps for a short period, perhaps longer term”. The message went out to BA staff just before lunchtime on Friday.

A spokeswoman for BA declined to comment on the number of roles being cut.

The warning comes as airlines around the world have been engulfed in a deepening crisis as coronavirus has spread rapidly, hitting passenger demand.

President Donald Trump’s decision to ban non-American citizens from travelling to the US from most European nations on Wednesday evening further darkened an outlook for an airline sector estimated to be facing a hit of at least $100 billion (€90 billion) from the pandemic. – Copyright The Financial Times Limited 2020