China now has almost 81,000 confirmed cases but 64,000 patients have recovered 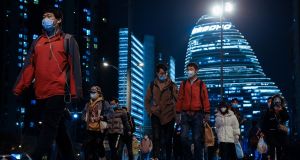 New cases of coronavirus in China dropped to single digits for the first time since the country began daily reporting in January, as a war of words over the handling of the outbreak intensified and Beijing accused the US of “China-bashing”.

Chinese health officials announced eight new cases and seven additional deaths on Friday, in the strongest sign yet the outbreak appears to be coming under control in the epicentre.

Five of Friday’s cases were in Wuhan, while three were people who had recently flown into the country.

Just one month ago China was witnessing an exponential growth in new infections and added nearly 15,000 cases in one day, with officials on Friday saying their stringent nationwide measures in place since late January were now showing results.

In a phone call with United Nations secretary general Antonio Guterres, state media reported that President Xi Jinping said the outbreak had peaked in China and the country’s “hard work has won precious time for . . . other countries’ epidemic prevention and control”.

Stung by criticism this week by the Trump administration over the early handling of the outbreak, the state-run China Daily said on Friday “the stark contrast between the fast increase of infections outside of China, including in the US, and the decrease in the number of cases in China should awaken other countries to the dangers created by the China-bashing orchestrated by a handful of US politicians.”

Rather than being a scapegoat, the editorial said “China is an example worth heeding”.

The editorial was in response to comments made by Robert O’Brien, the US national security adviser, who said China had initially covered up the outbreak, which has infected more than 136,000 people worldwide, and has “cost the world community two months to respond”.

“Unfortunately, rather than using best practices, this outbreak in Wuhan was covered up”, and had China acted more transparently, “we could have dramatically curtailed what happened both in China and what is now happening across the world”.

He also insisted the virus originated in Wuhan, which some in China now contest.

Officials described his comments as “shameless”, and were equally incensed by secretary of state Mike Pompeo’s insistence on referring to the coronavirus as “the Wuhan virus”.

A Chinese foreign ministry official advanced an unfounded theory in response, one that has been circulating on Chinese social media, that the US army might have brought the virus to China when soldiers from around the globe competed in the Military World Games in Wuhan in October.

“It might be US army who brought the epidemic to Wuhan,” spokesman Zhao Lijian wrote in a tweet. “Be transparent! Make public your data! US owe us an explanation!!”

China’s Centre for Disease Control and Prevention has said the virus originated from wild animals sold in a Wuhan market. But in recent days some officials have claimed it may have originated elsewhere, without offering supporting evidence.

While China’s work environment is slowly starting to return to normality, strict containment measures are still in place. Schools and universities are still closed in most provinces, for instance, and anyone entering the country, or moving from city to city, must self-quarantine for 14 days on arrival.

In his call to the UN leader, Mr Xi said China would not become complacent now the infection level had dropped, but would “act as prudently at the end as at the beginning”.

More than 2,000 manufacturing companies have started making masks in recent weeks and are producing 120 million per day in “an all-out war effort” to try to meet demand, said officials.

Mr Xi said that China would “offer as much assistance as it can” to help virus-stricken countries with expertise and medical equipment, and this week exported some supplies to Italy, Iran and Spain, among other countries.