Bars and shops across Italy have been closed as tougher restrictions were added to an already severe lockdown aimed to fight coronavirus contagion. All shops are now shuttered except supermarkets, food stores and chemists. Video: Reuters 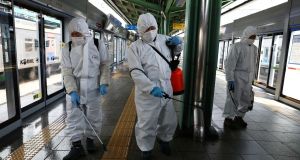 Canadian prime minister Justin Trudeau will be in isolation for two weeks after his wife, Sophie, tested positive for coronavirus, on Thursday, and the outbreak prompted the province of Ontario to shutter schools to limit the spread.

Sophie Gregoire Trudeau recently returned from London and experienced flu-like symptoms, so she was tested for coronavirus also known as Covid -19, the prime minister’s office said earlier on Thursday. The test came back positive, it said in the evening.

“The prime minister is in good health with no symptoms. As a precautionary measure and following the advice of doctors, he will be in isolation for a planned period of 14 days,” an official statement said. Sophie will be in quarantine for 14 days.

“The prime minister will continue to fully assume his duties and will address Canadians tomorrow.”

In a personal note, Ms Gregoire Trudeau said she was “experiencing uncomfortable symptoms of the virus,” adding that she “will be back on my feet soon”.

Canada reported 145 new case of the virus, a three-fold gain from a week ago. There has been one death. Seven of Canada’s 10 provinces have recorded infections.

Ontario, the most populous province, reported 17 new cases overnight, a 40 per cent jump. To contain the virus, authorities ordered all schools to close from Saturday to April 5th.

Globally, more than 127,000 people have been infected by the sometimes deadly respiratory illness Covid-19 and more than 4,900 have died worldwide.

Italy, the centre of Europe’s coronavirus pandemic, has hit the milestone of 1,000 deaths since it saw its first cases of the virus in mid-February.

On Thursday, the country registered 15,113 confirmed cases and the death toll hit 1,016. More than half of those who are in intensive care in Italy are located in Lombardy province. Hospitals in Lombardy are overflowing with the dead.

Nepal has closed all of its Himalayan peaks including Mount Everest this climbing season because of fears of the outbreak, a government minister said on Friday. Nepal, home to eight of the world’s 14 highest mountains including Mount Everest, gets more than four million dollars in permit fees for the world’s highest peak and other mountains every year. Tourism minister Yogesh Bhattarai said expeditions to all peaks in the March-May spring season had been suspended. Nepal has confirmed just one case of the virus – a student studying in China on a trip home – out of 450 people tested.

Australian prime minister Scott Morrison on Friday urged people not gather in groups of more than 500 but said he would still go to a weekend rugby game, as health officials warned millions of residents will contract the disease within months.

Australia has recorded 156 infections and three deaths from the flu-like disease, figures that authorities expect to increase rapidly in the coming weeks.

Morrison said his government will from Monday advise against non essential gatherings of more than 500 people, though this does not include schools, airports or public transport.

“This is an early-stage action that we are undertaking to make sure we get ahead of this,” Mr Morrison told reporters in Sydney, adding Australians should also reconsider their need for any overseas travel.

Health officials warned millions of Australians will contract the coronavirus within the next six months.

“We’re anticipating 20 per cent of the population in the first wave to be affected,” Kerry Chant, the chief medical officer for the New South Wales (NSW) state government.

Australia’s ban on foreigners from arriving from China, Iran and South Korea was extended on Thursday to cover Italy, and has formed a key part of Australia’s move to stop the spread of the virus.

The UK has moved on to the next stage of its response to the coronavirus outbreak, as experts and politicians accepted the virus could no longer be contained.

The shift, which could see restrictions imposed in an effort to delay the spread of the disease, was confirmed by Scotland’s first minister Nicola Sturgeon following a meeting of the Cobra emergency committee chaired by British prime minister Boris Johnson. The move came as two more deaths were announced in British hospitals and the number of people who had tested positive for coronavirus in the UK reached almost 600. Ten people have now died in the UK after testing positive for the condition.

US president Donald Trump on Thursday said he was not concerned about being exposed to the coronavirus after dining last week with Brazilian president Jair Bolsonaro and a government official who has since tested positive for the virus. The day after announcing curbs on travel to the US by EU residents, Mr Trump brushed off concerns about his possible exposure to the virus, which has sickened more than 126,000 people in a worldwide pandemic. “Let’s put it this way: I’m not concerned,” Mr Trump told reporters while meeting with Taoiseach Leo Varadkar in the Oval Office. Mayor Bill de Blasio declared a state of emergency for New York City, saying the city would work with the state to enforce its decree against gatherings of more than 500 people to combat the coronavirus outbreak.

On Thursday, Norway and India both reported their first deaths from the virus.

Spain’s lower house of parliament decided to close down for at least a week after far-right Vox politician Javier Ortega Smith was diagnosed with the virus. His party leader Santiago Abascal later tweeted that he had also tested positive for Covid-19.

The Czech Republic will close its borders to travellers crossing from Germany and Austria and also ban the entry of foreigners coming from other countries to contain the coronavirus outbreak, prime minister Andrej Babis said on Thursday.

Czechs will also be barred from travelling to those countries effective from Saturday. Those countries include Italy, Sweden, France, Netherlands, Belgium, Spain and Denmark, and also Britain, Switzerland, Norway, China, South Korea and Iran.

The European Commission has decided to require most of its staff to work from home from Monday, March 16th, due to the coronavirus, the president of the EU executive told employees in a video recording on Thursday.

“As of Monday, all colleagues in non-critical functions will have to telework,” European Commission president Ursula von der Leyen told staff.

About 32,000 people are employed by the European Commission, mainly in Brussels but also in Luxembourg. Ms Von der Leyen said six commission staff members have tested positive for the virus.

France will from next week close all creches, schools and universities to try to curb the spread of the coronavirus, president Emmanuel Macron said in a televised address.

Describing the outbreak as France’s biggest public health crisis in a century, Mr Macron said, however, that municipal elections scheduled for this weekend should go ahead.

Belgium’s government on Thursday ordered schools, cafes, restaurants and some shops to close due to the coronavirus. Portugal also ordered all schools to close, until further evaluation on April 9th.

Greece’s health ministry on Thursday said nightclubs, gyms, cinemas and theatres would be closed for two weeks as a precaution to prevent the spread of coronavirus.

Two of the premier tourist attractions in the Netherlands, the Rijmsmuseum national gallery and the Van Gogh museum, closed their doors to the public on Thursday as a government ban on gatherings of more than 100 people was imposed in response to the coronavirus pandemic.

The global coronavirus pandemic could be over by June if countries mobilise to fight it, a senior Chinese medical adviser said on Thursday.

China has declared the peak had passed there, and new cases in Hubei province fell to single digits for the first time.

Around two-thirds of global cases of the coronavirus have been recorded in China’s central Hubei province, where the virus first emerged in December. But in recent weeks the vast majority of new cases have been outside China.