Spain is second most affected country in Europe with 56,000 cases and 4,000 deaths 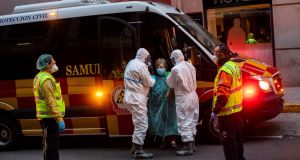 A patient is transferred to a medicalised hotel during the COVID-19 outbreak in Madrid, Spain. File photograph: Bernat Armangue/AP.

The Spanish government has withdrawn 9,000 Chinese-made coronavirus testing kits from use after it emerged that they had an accurate detection rate of just 30 per cent.

Like other countries struggling to diagnose and treat the virus, Spain has looked to China for rapid testing kits and much-needed supplies, and announced this week that it would spend €432 million on tests, masks, gloves and other personal protective equipment.

Spain, which is the European country most affected by the coronavirus after Italy, has so far recorded more than 56,000 cases of the disease and more than 4,000 deaths.

Health workers, who account for about 14 per cent of the country’s coronavirus victims, have complained of a lack of basic protective equipment such as face masks and gowns.

However, a batch of Chinese-made kits testing bought by Spanish health authorities a few weeks ago has been pulled after they were discovered to be unreliable and the Chinese government said they had been made by a company that did not appear on its list of authorised manufacturers.

In a statement on Thursday, Spain’s health ministry said it would be returning the kits, but stressed that they had not been bought directly from the Chinese manufacturer but from a supply company in Spain that had purchased them in China and had provided the necessary accompanying paperwork.

“The first tests on the rapid testing kits were carried out simultaneously by a hospital in Madrid and by the Carlos III Health Institute, and as soon as their low sensitivity was discovered, they were withdrawn,” said the ministry. “The supplier has been contacted and replacement tests will be provided.”

Certificates shared by the ministry included an EU declaration of conformity for the products, which, according to the documentation, were made by the Shenzen Bioeasy Biotechnology Company Limited in Guandong province.

“Spain follows EU regulations, which mean that if a product is certified to conform to European standards, it can be bought and sold throughout the union area,” said the statement.

The ministry said the deficient kits were not part of the new, €432 million Chinese order, and had been bought before Chinese authorities had issued a list of approved manufacturers.