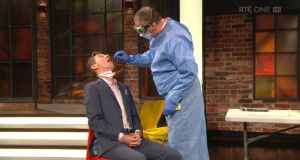 Miriam O’Callaghan is to become the first woman to present The Late Late Show in its 58-year history.

O’Callaghan will stand in for Ryan Tubridy, who remains off with a persistent cough.

Tubridy has been absent all week from his RTÉ Radio 1 morning programme, where Oliver Callan has been the stand-in presenter.

In a statement RTÉ said: “Due to a persistent cough, Ryan is adhering to best practice and staying away.”

Tubridy last week invited people who were testing for coronavirus into the Late Late Show studio in an attempt to demystify the process. He showed how to be tested for the virus.

O’Callaghan said: “I’m delighted to be able to step in tonight and present The Late Late Show. We have to keep the show on the road. Best wishes to Ryan.”

Friday’s Late Late Show will pay tribute to the men and women of Ireland’s front-line services who have been leading the fight to slow down and treat the spread of coronavirus.

Following what RTÉ says will be a “very special opening segment at the top of the show”, viewers around the country will be invited to join in a collective round of applause for our frontline service heroes.

Hozier will launch an emergency on-air appeal for the ISPCC, which is experiencing a surge in calls to its Childline service.

He will perform an exclusive set, live in studio, and promote a new initiative between ISPCC and RTÉ 2FM, where top Irish artists are performing across 2FM every night for a fortnight to raise funds.

Caroline O’Sullivan from the ISPCC will also be on the show offering advice.

The soccer player Lee Duffy – who has played for Newry Town, Shelbourne and Drogheda United – will talk about about his harrowing experience when he contracted coronavirus and was hospitalised.

The Mrs Brown’s Boys stars Brendan O’Carroll and wife, Jennifer Gibney, will be talking via Skype link from Florida, and the comedian Dara Ó Briain will join the show from London.

The Former Ireland rugby player Brian O’Driscoll will also be on the show, as well as the former GAA commentator Mícheál Ó Muircheartaigh.

What does theatre look like streamed directly into your home?
7