Tens of millions in India face ‘calamitous situation’ due to lockdown 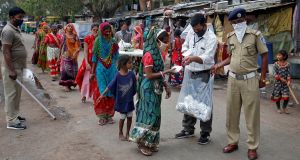 Tens of millions of daily wage earners across India face financial deprivation and possible starvation following the countrywide lockdown to contain the spread of the Covid-19 coronavirus pandemic.

The Indian government has told people not leave their homes except in emergencies or to buy food and other necessities, in a lockdown due to continue until mid-April.

Senior government officials and financial analysts warned that a majority of the estimated 437 million Indian workers in the agricultural and unorganised sectors, comprising a third of India’s entire population, were financially vulnerable and faced a “calamitous situation”.

Some 264 million of these workers are employed across rural India, while the remaining 173 million work in the informal urban sector. They include construction labourers, security guards, rickshaw pullers, street vendors, garbage collectors and domestic workers.

Many are also street entrepreneurs, running tea stalls or food “dhabas” and shops that in turn provide employment for others.

About 90 per cent these workers relied exclusively on cash to meet their daily requirements. This has dried up in recent days since the nationwide lockdown began.

“My daily earnings were 600 rupees (€7.28) and I managed to feed my six family members,” said house painter Subhash Gupta in New Delhi. “But now with no money coming in we are running out of food and I don’t know what to do.”

Like millions of others like him Mr Gupta has no financial safety net of either insurance, pension payments or any savings.

On Thursday federal finance minister Nirmala Sitharaman announced a €20.4 billion package for the poor that included direct cash transfers and food security measures for the next three months.

But analysts and economists said there was no evidence that the government had a definitive plan to transfer these benefits to tens of millions in the unorganised sector as many did not even have bank accounts.

Besides, many are migrant workers who travel the country in search of employment during the harvesting seasons, as well as at building sites, in shops, roadside eateries, private homes and small businesses.

Economic journalist P Vaidyanathan Aiiyar said the question of the government’s ability to locate and deliver financial and food support to large numbers of migrant labourers was a deep worry. “The harvesting season in late March and April has only exacerbated the problem,” he said.

Farmers across India too were panicking, as ripened fruit and vegetables were rotting as wholesale markets remained closed in the lockdown and all movement of labour, under government fiat, was at a standstill.

The annual wheat crop, which is harvested from mid-April onwards and is the financial mainstay of India’s rural economy, will also be endangered if the corona virus pandemic does not abate and the lockdown is not relaxed or rescinded.

Economist Jayati Ghosh of Jawaharlal Nehru University in Delhi painted an alarming scenario of imminent food riots and widespread unrest due to the growing shortage of money and essential items, which she anticipates will “cripple the entire countryside”.

“We face dystopic scenarios in the near future. It’s like falling off the economic cliff,” she said.

Meanwhile, tens of thousands of laid-off workers ended up walking long distances back to their villages over several days after prime minister Narendra Modi imposed the countrywide lockdown earlier this week, which included the suspension of all Indian Rail passenger services.

“I don’t want to do this but I have no option,” steel factory worker Awadhesh Kumar told NDTV on his two-day walk home from Unnao to his village in Barabanki district, some 90km away in northern Uttar Pradesh state. “The factory management asked me to leave, so I had no choice but to walk home,” he said.