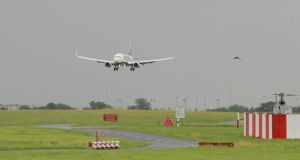 Minister for Transport Eamon Ryan says now is ‘not the time’ to make a call on whether Irish people living abroad should come home for Christmas. Photograph: Bryan O’Brien

From Monday, the State is part of the EU traffic-light system for international travel which refers to regions rather than individual countries.

Under the system, those arriving from green regions can enter the State without restricting their movements or undergoing testing.

Greenland is currently the only green country on the list.

Under the EU traffic light system, passengers arriving from an orange region who have taken the standard PCR Covid-19 test up to three days before travel and have a negative result do not need to restrict their movements upon arrival in their destination. Norway, Finland, parts of Greece and the Azores are currently classified as orange regions.

Passengers who arrive from red regions, which accounts for most of Europe at present, must restrict their movement for 14 days.

The Minister for Transport Eamon Ryan has also said that Covid-19 testing measures which could enable people to travel in and out of Irish airports over Christmas should be in place by December 1st.

He said testing capacity would be introduced at airports and ports but cautioned that “now was not the time” to make a call on whether Irish people living abroad should plan to come home for Christmas.

Asked whether spare testing capacity could be moved to airports for people arriving into the country, Mr Ryan said the Government did not want to “impinge on the capability” of the HSE to cover domestic health management needs.

The Minister said the Government was working with Dublin Airport Authority to develop testing capacity but that it “isn’t something you can just switch on overnight”.

However, when asked if testing infrastructure would be in place at airports by December 1st, Mr Ryan replied it would, before warning that the Government would not yet make a call on whether people should travel home for Christmas. “We’ll make that call in early December, not now,” he said.

The company said it would allow for test results within just a few hours under pre-departure tests for passengers flying out of the airport in accordance with the EU’s traffic-light system.

Prices for the service start at €149 per test.

Dr Cillian de Gascún, director of the National Virus Reference Laboratory, said over the weekend it was “far too early” to make a definitive decision as to whether people should travel home to be with their families at Christmas.

Dr de Gascún said the Government hoped to see virus levels drop internationally before making a decision given that many people would be travelling from continental Europe and the US.

A situation where people must limit their close contacts to a small group of people may also be considered over the Christmas period, he said.

Asked whether the State might introduce rapid testing at ports, Dr De Gascún said preliminary research into the fast acting tests showed they were not as reliable as PCR testing system which is currently used to detect the virus.

He added that rapid testing “isn’t a silver bullet” but one component among a variety of measures needed while living with Covid-19.

Under the EU traffic light system essential workers, including healthcare workers and transport workers along with those travelling for “imperative business or family reasons” and medical reasons, are exempt from restricting their movements. Students who travel abroad on a daily basis, diplomats, NGO staff, passengers in transit, seafarers and journalists, when performing their duties, are also exempt.

A statement from the Department of Transport said “further intensive work” was under way to develop an approach for people arriving from red regions and that these plans would be considered by Government on Tuesday.

The department noted that passengers arriving from Denmark must take additional precautions aimed at limiting the spread of the newly discovered Covid-19 variant which has been connected to mink farms and restrict their movements for 14 days upon arrival in Ireland.

Even those undertaking an “essential” journey must quarantine for a fortnight upon arrival in Ireland, said the department.