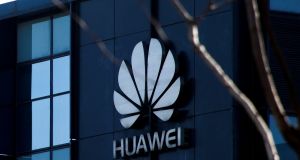 Huawei called its exclusion “a discriminatory act based on a groundless and misleading warning issued by [the country’s agency for cybersecurity] ... If no resolution is found, Huawei will consider all its options.” Photograph: Thomas Peter/Reuters

The Czech Republic has become the latest country to take action against Chinese technology firm Huawei, as a US-led push to tackle alleged security threats from Beijing meets with a mixed response in central Europe.

Huawei, the world’s biggest producer of telecom equipment, was this week banned from competing for a €20 million contract to build an online portal to handle Czech tax returns, following a warning from the country’s agency for cybersecurity (Nukib).

“China’s laws . . . require private companies residing in China to co-operate with intelligence services, therefore introducing them into the key state systems might present a threat,” Dusan Navratil, the director of Nukib, said in December.

The firm called its exclusion from the tender on Wednesday “a discriminatory act based on a groundless and misleading warning issued by Nukib . . . If no resolution is found, Huawei will consider all its options.”

Prague announced its decision just days after US prosecutors unveiled 23 charges against Huawei, several of which involve Meng Wanzhou, the firm’s chief financial officer and the daughter of its founder, who was arrested in Canada two months ago.

Ms Meng faces extradition to the US on charges of conspiring to violate sanctions on Iran, but her lawyer insists she is innocent and should be not be used as “a pawn or a hostage” in a trade war between the world’s largest economies.

Huawei denies charges that include theft of technology from a rival, and insists that it does not pose a security threat to clients, but the US is urging its own firms and foreign allies to look elsewhere as they upgrade to 5G internet technology.

Australia and New Zealand have already banned Huawei from providing 5G equipment, amid fears that China’s security services could infiltrate their high-speed networks and demand users’ data from the company – which denies co-operating with Beijing’s spy agencies.

Germany is reportedly considering whether to restrict Huawei’s access to its next-generation networks, and Britain has raised concerns over the security of the firm’s equipment; Ireland has not expressed any such worries, however, and Huawei hardware is believed to be used by all the State’s telecom operators.

The furore around the company and the growing US-China trade war has increased scrutiny of Beijing’s ambitions in central and eastern Europe, where in recent years it has ramped up investment in major infrastructure projects.

Poland is expected to bar Huawei from its 5G network after arresting a Chinese company executive and a Polish national for alleged spying in January. Both men deny the charges and the firm has dismissed the employee.

Neighbouring Slovakia appears to have no fears about Huawei, however, and prime minister Peter Pellegrini said this week: “If we want to talk about cybersecurity, we should talk about all companies and not single out one of them.”

Hungarian prime minister Viktor Orban has courted Chinese investment amid strained ties with the EU, and his officials also say they are not concerned by Huawei, which has established a European operations and maintenance centre in the country and invested about €1 billion there since 2005.