Resignations follow Thuringia deal with extremists and Kramp-Karrenbauer is tainted 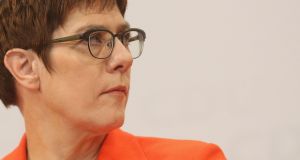 Support for Germany’s ruling party has collapsed 10 points to just 12 per cent in the eastern state of Thuringia as voters react to its alliance with the far right to elect a state premier.

On Wednesday, Christian Democratic Union (CDU) politicians in the state parliament of Thuringia and the liberal Free Democratic Party (FDP) backed the latter party’s leader as minister president – a vote successful only with last-minute backing of the far-right Alternative für Deutschland (AfD).

The vote was the first time in modern Germany history that mainstream parties joined forces with extremists. A massive public protest, immediate and vocal, saw the new state leader – Thomas Kemmerich – announce his resignation on Thursday after just 24 hours.

He was followed on Friday by local CDU leader Mike Mohring, who previously defended his party’s election alliance with the AfD.

Now Thuringia, one of Germany’s smallest federal states, is struggling to find a way out of the political chaos created by the AfD’s election coup.

After a state election last October failed to return a coalition with a clear majority, the local CDU is particularly anxious to avoid going back to voters. Until now it refused to tolerate a minority administration under the leadership of the Left Party, thus its attempts to engineer an alternative on Wednesday. But a new poll, predicting an election wipe-out for the CDU, has hardened its determination to avoid returning to voters.

In another survey issued on Friday, 58 per cent of Thuringian voters said it was wrong for Mr Kemmerich to rely on AfD support for power. A third of voters saw no problem in alliances with the AfD, which in seven years has radicalised from its bailout protest roots into a far-right movement.

Thuringia’s AfD head Björn Höcke, the party’s leading radicalising force, calls himself a “social patriot” while critics accuse him of flirting with Holocaust denial and relativising Nazi crimes. Last year, a German court said his publicly expressed views, often echoing Hitler, made it permissible to describe him in public as a “fascist”.

On Saturday in Berlin, federal CDU figures, led by chancellor Angela Merkel, will try to calm their furious grand coalition partner, the Social Democrats (SPD). The SPD was part of a three-way coalition, alongside the Left Party and Greens, that was seeking a return to power in Thuringia.

As the dust settles on this week’s vote, leading German historians have expressed surprise that the Thuringian CDU and FDP were not reminded of a dangerous precedent: the conservative pact that brought Hitler to power in 1933.

“Either it was remarkable scrupulousness of the FDP and CDU to go along with this . . . or it was naivete,” said Prof Herfried Münkler, a historian at Berlin’s Humboldt University, on national radio. Asked if historical amnesia lay behind the pact with the AfD, he added: “That sounds as if they once understood and simply forgot. I fear they never grasped it to begin with.”

German political analysts suggest this week’s Thuringian earthquake has shattered a political taboo and will cause shockwaves for some time to come.

CDU leader Annegret Kramp-Karrenbauer has faced a massive hail of criticism from within her party and without. The most common is her failure to make Thuringian CDU leaders heed the party’s own ban on any kind of alliance with the AfD.

Just 14 months after she succeeded Merkel as party leader, the influential Bild tabloid predicts that this week’s drama has sealed her political ambitions. It wrote: “Annegret Kramp-Karrenbauer, who wanted to become the chancellor candidate at all costs, has proven that her authority and leadership strength is not even enough to tame the CDU state party in Thuringia.”