Democratic candidates gear up in advance of first primary contest 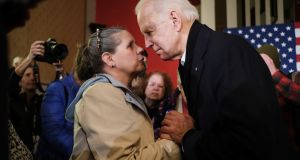 Democratic presidential candidates will intensify their campaigns in New Hampshire this weekend ahead of the nation’s first primary contest on Tuesday.

The New England state – which, unlike Iowa, runs a primary rather than a caucus – will see eligible Democratic voters choose their candidate to become the party’s nominee a week after voters in Iowa cast their vote in a chaotic process.

With results of all precincts in Iowa released, Indiana mayor Pete Buttigieg was declared the winner, narrowly edging out Vermont senator Bernie Sanders in terms of state delegate equivalents – a metric used to calculate the number of delegates the state will send to the Democratic National Convention in Milkwaukee in July.

Mr Sanders won the popular vote, however, leading him to also claim victory.

Mr Buttigieg led the field with 26.2 per cent of delegates, according to the final results, just ahead of Mr Sanders at 26.1 per cent. Elizabeth Warren came in at 18 per cent, with former vice-president Joe Biden at 15.8 per cent.

The Associated Press announced that Mr Buttigieg won 12 of the state delegates, with 11 for Mr Sanders, Ms Warren at 8 and Mr Biden at six.

The unexpected victory for Mr Buttigieg, who benefited from a strong campaign in Iowa and a moderate political stance that resonated with caucus goers in the midwestern state, gave the 38-year-old former mayor a boost in polling numbers in New Hampshire.

A new Boston Globe – WBX – Suffolk University poll released late on Thursday put Mr Buttigieg in a virtual tie with Mr Sanders, who had been well ahead in most New Hampshire polls. While Mr Sanders was still ahead on 24 per cent, his younger rival was at 23 per cent, up from 11 per cent – a 12-point jump in four days.

A Monmouth University poll on Thursday, however, put Mr Sanders comfortably ahead at 24 per cent, with Mr Buttigieg placed second, Mr Biden in third place, and Massachusetts senator Ms Warren in fourth.

The top candidates were due to take part in a CNN debate in the New Hampshire capital of Manchester on Friday night.

As well as the four top-polling candidates, Minnesota senator Amy Klobuchar, tech executive Andrew Yang and billionaire candidate Tom Steyer were also due to take part in the final debate before Tuesday’s vote.

Mr Biden in particular is under pressure to perform well given his disappointing performance in Iowa. The former vice-president has been the front-runner in national polls but finished in fourth place in the Iowa caucuses.

With state officials reporting difficulties transmitting precinct results to headquarters via an app that had been developed specifically for the vote, and special hotlines clogged, the Iowa Democratic Party reported its final tallies almost five days late.

Even then, questions were raised about irregularities in the reporting process, casting into doubt the state’s future as the first state to vote in presidential primary contests.

Democratic candidates have until noon on Monday to call for a recanvass or recount.

Meanwhile, speaking as he left Washington for an event in North Carolina, President Donald Trump said the House of Representatives should “expunge” his impeachment because it was a “total political hoax”. But asked about his comments, House speaker Nancy Pelosi dismissed them.

“They can’t do that,” she told reporters.

Mr Trump was speaking as new figures showed the US economy continued to strengthen.

The US labour department said 225,000 jobs were added in January, while wages rose 3.1 per cent year on year.